De luxe in Sunset Park (the realtors rub their hands)

“Sunset Park is continually one of the more talked-about neighborhoods in Brooklyn and maybe all of New York City, said John Brennan, of Marcus & Millichap, who specializes in investment real estate assets in Southern Brooklyn ...
Brennan anticipates a surge of residential and retail development in and around the waterfront’s manufacturing area.
“I’ve already seen an increase in residential development slated along Fourth Avenue,” he said. “You’ll probably start seeing a lot of new projects in the next 12 to 24 months.”

One of the developments featured in the article involves a couple of apartment buildings opposite Green-Wood Cemetery, between 33rd & 34th street.  816A/816 & 817A/817,which between them comprised eight modest apartments, are set to become four townhouses, priced for sale "for about $2 million each," according to a Compass broker.  We've watched the action on this block since 2014, and back then I assumed 816-817 would be replaced by condos. I hadn't guessed the townhouse route. I noticed the small plaques on the two buildings which identified them as Welsh Court, but couldn't find out anything about how they got the name.  I thought the block might once have shared a common courtyard to the rear, especially given its proximity to Woodrow & Roosevelt Courts, which share central courtyards. 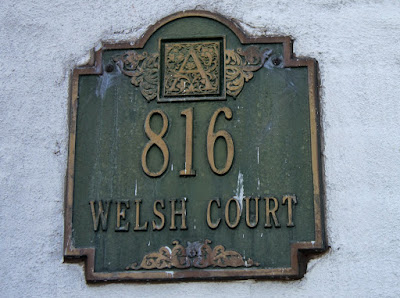 Here's a picture of the block taken in January. 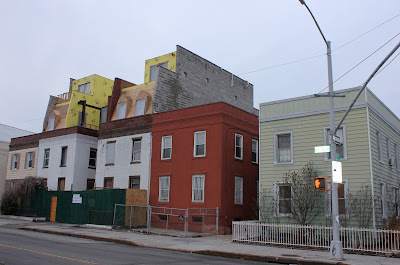 You can see 816 and 817 rising in all their fabulous glory.  They've just been slapped with SWOs though, as the engineer/expediter Scott Schnall has had his filing license revoked:

" DOB took the extraordinary step of revoking Scott Schnall’s filing privileges after observing a long pattern of false statements made to the Department, affecting multiple projects across New York City. In numerous cases, it was shown that Mr. Schnall regularly used his professional filing privileges to deliberately circumvent the Zoning Resolution and Construction Codes. "

This DOB statement was quoted in a Brownstoner story about Schnall posted earlier this month. The story has since been removed from the Brownstoner site.

The DNAinfo article notes that a $2 million dollar townhouse on 36th Street, "hitting all of the high notes of Brooklyn rustic-luxe chic," was recently purchased by a couple from the Red Hook/Columbia waterfront area, one of whom works at Industry City.  Clearly IC is a mover and shaker in the gentrification of Sunset Park, and if the BQX, contrary to the wishes of many Sunset Park residents, actually arrives on Third, it will aid and abet the process.  Displacement full steam (or glide?) ahead.

Maybe it's because of its English connotations that I've always despised the word townhouse as applied in the States. Its idiot sibling townhome is no better.  The two reek with toney affectation. Just call them houses, rowhouses, brownstones, frames, whatever.   Just call them homes.

Posted by onemorefoldedsunset at Saturday, March 18, 2017