I know I have much better photographs than this one, but it'll do for now.  The best view of Slab City is the one you'll get from the Culver Viaduct, as your train chugs towards Carroll Street.  This one's from 2011. 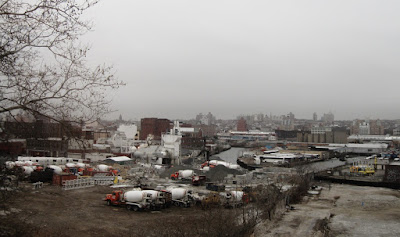 According to reports at the time Slab City was sited between Smith & the Canal, and Fourth & Sixth Streets. In an 1889 profile of the colony & its characters the Eagle includes mention of "Johnny the Birdman, who raised canaries and peddled them about the city."

"He was no bigger than an umbrella but he had lots of grit, and could hold his own in any kind of an argument. The birdman made money, but moved elsewhere to spend it."

Last week I read an interview with photographer Peter Bellamy.  It concerned work of his from the 1970's, specifically photographs he took in Brooklyn.  One of the pictures included in the interview showed a young boy of nine or ten, sitting on a pony in a patch of industrial scrub land, with the Kentile sign and the Viaduct right there in the background.  You can see it here.  When asked about the picture, Bellamy answered:

At that time that meadow there was just wide grass. These people would keep their horses there and you would see them every day when you’d go down into the F train. It was like no-man’s land. Nobody cared, nobody was there.

Right where the old Slab City had been - the very spot.  Somehow the picture showed the raffish spirit of the City, still alive and well in 1976.  A beautiful sight. 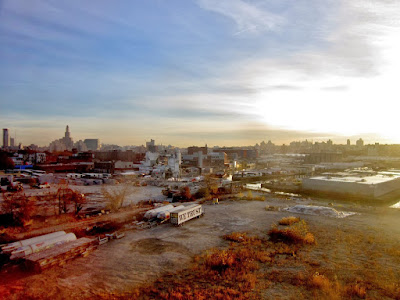 Posted by onemorefoldedsunset at Tuesday, July 05, 2016