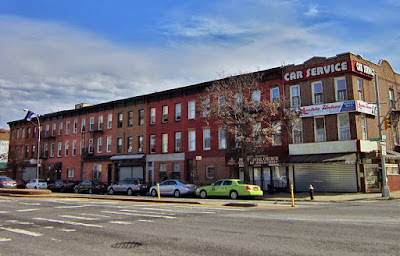 The Real Deal reported yesterday that Slate Property Group and Adam America Real Estate have acquired the eight building parcel of properties at 541-555 Fourth Avenue (15th Street) for $25 M.  The sellers, Anshel Friedman and Ariel Karpan, who payed 16.5M for the buildings, announced plans for a 12-story rental (complete with pet spa) last September, but with the site sitting idle for almost a year since then, I wondered if a flip of the properties was on the cards.  And here it is. The new owners plan a slightly larger building, which will remain rental, and will include retail. Inclusionary housing units are also planned.  Just last month developers at 685 Fourth (22nd Street) filed plans for a new building that will also include units of affordable housing, so it looks like there's a new (if meagre) component to apartment construction on the avenue.  A trend, of sorts.


As The Real Deal notes, Slate/Adam America are involved in the controversial Rivington House sale, having bought the property from Allure Group.  The developers are already active on Fourth, with property development at 270, 470 & 535 Fourth. There's still a partial SWO in effect at 535, (right next door to 541), where structural forms at the top of the building collapsed earlier in April .  DOB records reveal construction work performed contrary to plans, and plans have been filed to remove two flloors of the building, along with partial slab removal on lower floors.

Posted by onemorefoldedsunset at Friday, July 01, 2016