In the Heart of Prime 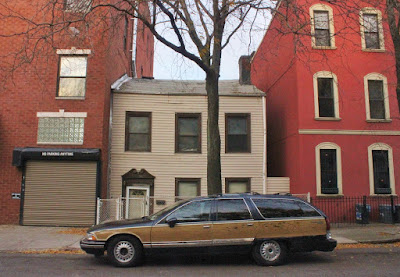 Every so often I check back in on the fate of 147 11th Street, the little pitched-roof frame house, set below street level and almost at the end of its days.  It sold last fall for just under a million, after a long time on the market, and after the sale it was promptly put back up for sale.  No takers, and it's still listed.  The building is fire-damaged, with a full vacate in place due to structural instability. There's also an SWO for work done without a permit.  The demolition plans were on record late last year, but no new building applications have been filed. 147, its buckling roof a bed of weeds, is irredeemable by this point, I'd imagine.


Construction plans or not, a future (manufacturing) building's up for rent at 147.  It all sounds a little over-optimistic.

Brand new construction to commence Summer 2016.
Will build to suit.
Up to 7,500 square feet available.
5,000 Square foot building with a 2,500 square foot legal basement with 9' ceilings and separate entrance
Located in the heart of prime of Gowanus bordering Park Slope.
Across the street from Ennis Playground


As I mentioned in an earlier post,  Lewis Hine walked the block a century ago, as he documented cases of child workers. and a Miss May Cray, a resident of 147, featured in a 1905 Chronicling America ad. for Peruna 18% grain alcohol tonic.  She's pictured right here.

These houses, and their histories are disappearing fast.


Posted by onemorefoldedsunset at Thursday, July 07, 2016