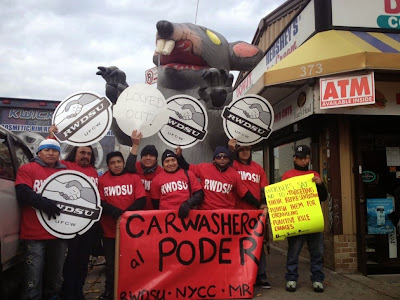 The Brooklyn workers have been on strike, calling for the right to unionize, since last November — and plan to continue until a contract is signed.
“We are hoping for more protection, like gloves and glasses,” said Angel Rebolledo, 53, who has worked at Vegas for eight years, shampooing, vacuuming and washing cars. “We want to be paid according to the law.”
The workers sued their boss Marat Leshehinsky last fall, alleging he paid them less than the minimum wage, with no overtime.

“The rabbits were in imminent danger from a severe blizzard headed for New York City,” said a spokeswoman for the ASPCA, which assisted cops in retrieving the animals.
The woman who owned the rabbits wasn’t charged because she was “reluctantly cooperative” in gathering up the animals Monday night, a police source said.


Posted by onemorefoldedsunset at Tuesday, January 27, 2015