I got back to Sunset Park walking this week, but only managed a few blocks on 57th before straying.
Near Seventh, I saw the Iglesia Cristiana Pentecostal "La Piedra Viva," 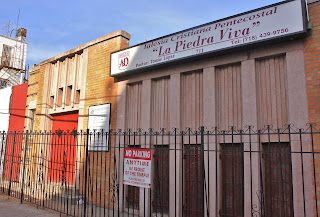 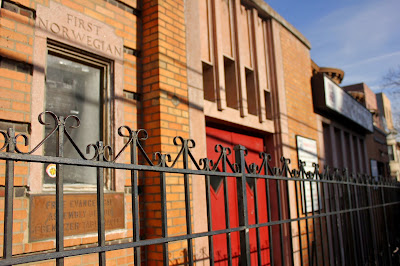 which was once the First Norwegian Free church, and then later, according to an added plaque, the Evangelical Assembly of God Eben-ezer Tabernacle.  A 1932 Eagle article refers to a new building at this site as the home of the Norwegian Baptist Church, who had been temporarily meeting at a store on Seventh Avenue, and before that worshipped for twenty-nine years in the Mariners Temple, Manhattan.  I don't know when the Tabernacle took over the space - the movement & lodging of congregations at different locations throughout the borough, even today, is hectic. I did find a 1970 NAHA (Norwegian American Historical Association) article on the history of Norwegians in New York which proved quite interesting, especially as it described the migration of the Brooklyn Norwegian contingent in Red Hook, south, through Park Slope, & into the Sunset Park/Bay Ridge area.

At Ninth Avenue, I should have headed around & turned back down 56th, but instead I kept going to Fort Hamilton Parkway and took it south, past Leif Ericson Park & into the 70s.  I stopped at the My Three Sons Greek diner for a coffee, and wished I'd had time to stay and eat.  At the counter a bald, heavy, middle-aged man with crutches was drifting quietly down into afternoon sleep, though the booths were lively with the chatter of elderly women.  It was small enough in here to feel like someone's living room, and would be a good place to listen to stories. The men in white working the place had a nice, sober, old-school courtesy about them, even in the act of serving a dollar cup of coffee. I'd be back.


Posted by onemorefoldedsunset at Wednesday, December 31, 2014