Real Estate Monday faded quietly away over the summer, occasionally appearing as Real Estate Tuesday, and then absent altogether.  I guess it's due to a change in my day-to-day schedule, and a dog appearing around the place, gradually finding its hairy place in the household.  New routines are not yet in place.  Much as I've enjoyed the summer, I always look forward to September, which feels like the real, organized, start of the year.  So with fall on the horizon, Real Estate Monday is back, casting an amateurish eye on the mysteries of Brooklyn property sales.

If you want something swishier, you could try a three bedroom condo on 21st Street , in the beautiful old St. John's parochial school, which is on the market for a mind-boggling $2,899,000.  What resident living around here even a few years ago would have envisioned a price like this?
For around the same price as the 21st Street condo, you could still buy a whole building, 260 8th Street which featured on a Real Estate Monday post last November!  It's come down (massively) in price since then, from $2,999,000 to $2,949,000, and has acquired a name, The Post House.  A perfect name considering its location next to the parking lot of the Van Brunt P.O. (McDonald's back yard nestles on the other side.)  Here's a shot taken in fall of '13. 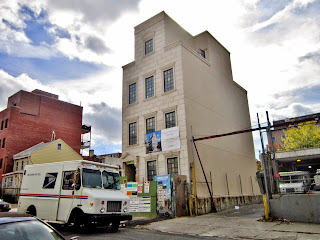 Further south, on Fifth and 33rd, across from the Sylvan Waters of the cemetery, two adjacent properties are for sale. Most of the block between 33rd & 34th is taken up by semi-detached two-storey, two-family houses, and 816 and 817 are currently on the market for $1,275,000 each.

I've always been intrigued by these buildings, which are not too far from the lovely Woodrow & Roosevelt Courts.  But I imagine the combo deal here, with that 50 foot wide lot, will be an irresistible development magnet.


Posted by onemorefoldedsunset at Monday, August 18, 2014