Construction at 491 Fifth ground to a halt quite some time ago. Here's a photograph of the unfinished slab of a four storey building in May of 2013.  It looks pretty much the same today. 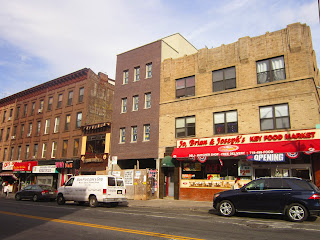 491 was sold in 2009 for $200,000, and the existing structure, a one storey building that Tacos Nuevo Mexico once occupied, before moving next door, was demolished in 2011.  Who knows why development stalled here, but last month there was other action.  The property changed hands, from CSM Realty Services , LLC to JNH Investment Co, for $2,950,000.  Let's see if this speeds things up a bit.

And up the block at 479 it's goodbye Avon, which recently closed after three years on Fifth.


Posted by onemorefoldedsunset at Tuesday, August 12, 2014