I've been enjoying looking at the digital collection of the Museum of the City of New York.  This Alfred C. Loonam picture, taken around 1940, at Third and 56th, marks the point I've got to in Part 1 of my 9th Street through Sunset Park walking tour.  It depicts what I believe is the unfinished Moses Gowanus Parkway, the narrower, pre-Expressway elevated roadway built on the structure of the old Third Avenue El.

Lewis Mumford wrote of the Moses project, in a 1959 New Yorker: 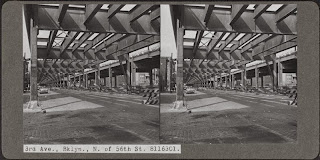 I'm going slowly.  I think I'll walk as far as 65th Street, which is more or less the boundary between Sunset Park and Bay Ridge, though I have toyed with the idea of stopping at 59th, the Brooklyn/New Utrecht divide. Then it's off heading east to loop from Fifth to Ninth Avenues in the opposite direction, back north. I'm not exactly speeding along here, but if you do this too quickly you a) stop really looking at your surroundings, and b) forget what you've seen.  And as I've learned a bit more about the history of the streets I've visited, I've become driven to go back to blocks I've previously walked.  There's always more than you thought you knew, or saw, and nothing remains the same.   The look of a block, the faces of a community, the you that walked a year ago and the you that walks today.  The rustle of dollars in the all cash deals that tear down, build up, drive out, and the rustling shifts in the layers of history that form a neighborhood's identity.  Some change is beautiful, and some very ugly indeed.  I wanted to say I'd walked each street at least once, over a year or so, even if I happily fall back to more aimless meandering.  A silly plan probably, but a strangely satisfying one. And I'm almost halfway there.


Posted by onemorefoldedsunset at Tuesday, August 26, 2014