Over the City Line 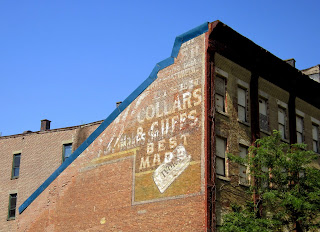 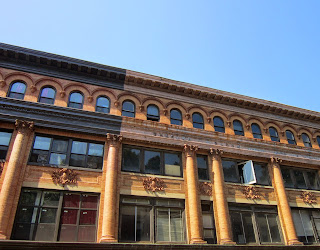 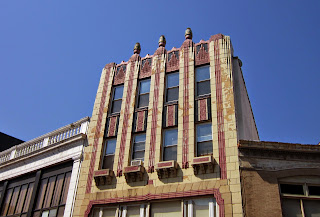 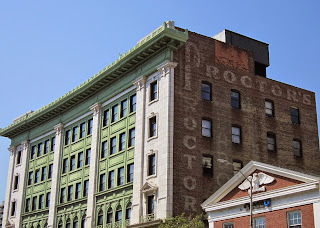 I got out of town yesterday.  I took a Metro North train thirty five minutes out of Grand Central to Yonkers, and spent the afternoon walking around the Getty Square downtown, strolling the boardwalk, and stopping by a cafe, dawdling over views of the water and the Palisades.  I got the best kind of tour, from a family member who lives there.

Yonkers is the fourth biggest city in New York State, after NYC, Buffalo & Rochester.  It is both urban and suburban in nature, covering a wide geographical area, and evoking a varied sense of place. In 1894 Yonkers had the chance to join a consolidated New York City, along with Kings, Queens & Richmond County.  The people of Yonkers declined the opportunity, just as later, the prospect of a subway connection to the Bronx was met with distaste.  Yonkers has suffered the effects of industrial decline just like many American cities, and also been scarred by its infamous civic history of racism.  But it's too easy for an outsider to rely on stereotypes about the city, which lead tony Yonkers college Sarah Lawrence to deny its real address, putting itself in Bronxville rather than its true location.  Too bad.  There's a lot more to the city than many imagine, with its wide range of income and ethnicity, burgeoning arts community, and (still) affordable housing options for people priced out of neighboring New York City.  Visit, and you'll find a city with a vastly different demographic from its 90% white population forty years ago.  Today Yonkers is 35% Hispanic and 18% African American, and has seen an influx of many different immigrant groups.  If its downtown problems seem all too typically post-industrial, with high rates of poverty and urban blight, it also has a stunning (if precarious) post-industrial architectural legacy: a vast array of nineteenth and early twentieth century industrial, mercantile and civic architecture, along with earlier historic buildings, like Philipse Manor Hall, which dates back to 1682.  And its riverfront location is both a glorious blessing - forging its identity and being, just simply, stunningly beautiful - and an amenity that developers can't resist taking advantage of.  The public spaces by the water are a great resource for all citizens, but there's always a price to pay.  The waterfront already has its share of high rise apartment buildings, but clearly there's a move inward, with all the attendant issues of displacement and destruction.

We walked along Buena Vista Avenue, a lower income area tucked just above the newer river apartments, and saw graceful Victorians, some the worse for wear, and some lovingly tended, with fine old porches and mansard roofs, and the prospect of clear Hudson views. We stopped at a community garden, bustling with local kids, and chatted to the garden director. We also noticed the number of For Sale signs and feared for the future of the avenue. Later digging around revealed multiple-lot development listings. 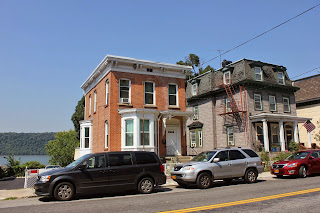 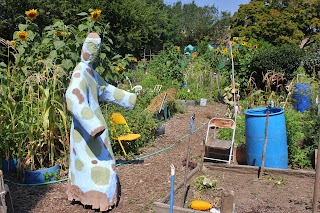 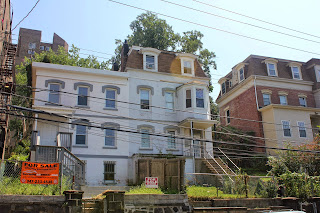 In the center of Getty Square, across from Philips Hall, a parking lot was recently removed ("daylighted") to uncover a buried section of the Saw Mill River.  Imagine such a thing! - like Joni Mitchell's song in reverse! Running water always draws people in, and it was nice to see people standing in the park, looking down at the fish, reading about the river's path, and chatting to strangers about what they saw.  It was amazing to think that a river had been right there, under the concrete, all along!.  Everywhere there are possibilities. 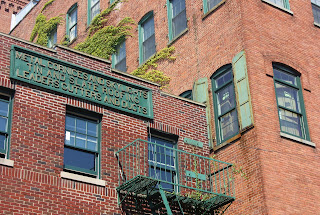 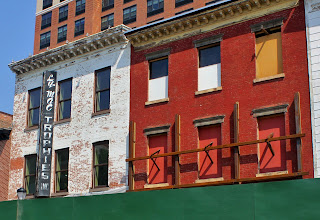 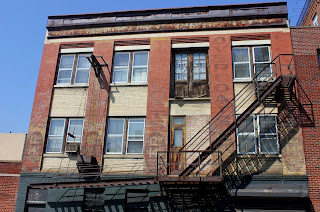 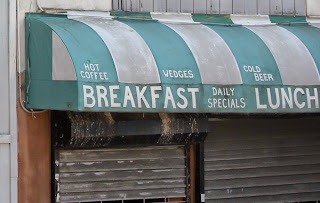 Posted by onemorefoldedsunset at Friday, August 29, 2014

Nice Yonkers report. The wedge is the regional name for hero, sub, grinder (my own region's name), etc., for the long Italian sandwich with cold cuts etc. There's a story that the name started with a Yonkers deli man's (maybe this one's?) abbreviation of "sandwich" to "wedge."