A Septet of Churches 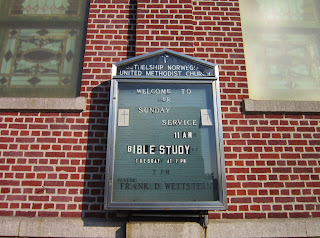 Even in the borough of churches, seven within three blocks seems like pretty good going.  At 5205 Fourth near 53rd,  the Templo de La Alabanza, formerly the Coliseum movie theater (see Montrose Morris's Brownstoner piece on the theater).  The Coliseum closed in 1992. 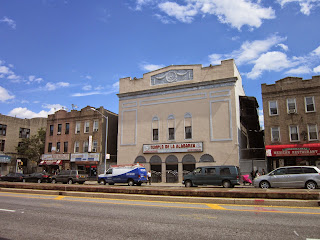 At the north-west corner of Fourth & 54th, two churches sit side by side.  These are the Sunset Park Community Church and the Iglesia Adventista del Septimo Deo de Bay Ridge. 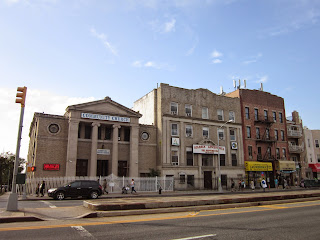 The Community Church came into being in 1996, when Christ to the Community combined with Salem Gospel Tabernacle (formerly the Salem Scandinavian Pentecostal Assembly).  The Salem congregation moved to its current address, formerly home to B'nai Jacob, in the 40s.
Across the street from these two churches on the NE corner is the Iglesia La Luz Del Mundo, and south of them, below 54th, St. Jacobi Evangelican Lutheran.  St. Jacobi's congregation was originally German, and founded a church at this site in 1909.  Today its congregation is primarily English, Spanish and Chinese speaking. St. Jacobi offered significant space for Occupy Sandy relief efforts. 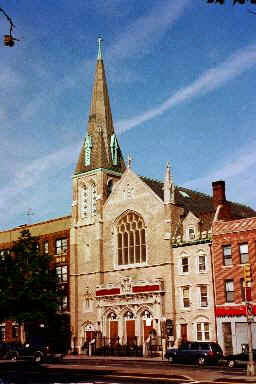 and on 55th east of Fourth, in a small brick building, Manna.

At 56th & Fourth, the Bethelship Norwegian United Methodist Church (founded as the Mariners' Methodist Episcopal Church in 1874), which moved to this spot in 1949, via Red Hook and Carroll Gardens.  Prior to the establishment of the church, the Bethel Ship mission, moored at Pier 11, in Brooklyn, ministered in an evangelical and social mission capacity to sailors and newly arrived immigrants, from the 1840s to the 1870s.  Sunset Park is well known for its Scandinavian roots, but you can read an interesting article about the Scandinavian waterfront communities farther north in Brooklyn in this Carroll Gardens Patch article written in 2011. 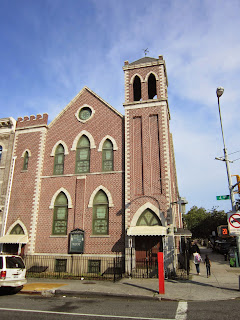 
Posted by onemorefoldedsunset at Friday, August 22, 2014

Thank you for the correction!