A Queens resident recently showed me a subway stop that can only be found on Google Maps:  the mysterious 11th Street Cut, between 59th St & Queensboro Plaza. 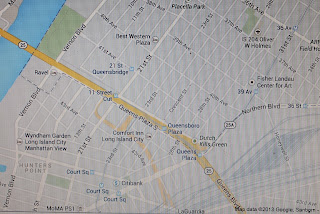 The phantom stop is located at the site of 60th Street Tunnel Connection, a line opened in 1955.  And the purpose of the line?

The 60th Street Tunnel Connection (also known as the 11th Street Connector) is a short connecting line of the New York City Subway connecting the BMTT 60th Street Tunnel under the East River (which connects to the BMT Broadway Line) with the IND Queens Boulevard Line west of Queens Plaza in Long Island City The connector does not have any stations.
The connection opened on December 1, 1955, and permitted BMT trains from Brooklyn to use the IND Queens Boulevard Line; the first service to do so was the Brighton Beach Local (BMT 1, now Q). Unlike the later Chrystie Street Connection, this was of the nature of a trackage rights operation, without the mixing of BMT and IND equipment or crews, as opposed to a true operating integration.
The connection now carries trains of the R service at all times but late nights.
(Metro Wiki)

This kind of stuff may be a bit too arcane for the amateur straphanger, but if you're serious about subways you can read more about its route over at SubChat .

As there never was a station here, it's unclear why Google has invented one.  But it does make me dream of a manhole cover leading to a secret, perfectly preserved 50s stop, and that in turn reminds me that the MTA nostalgia train rides begin again tomorrow, running on Sundays throughout December between 2nd Avenue & Queens Plaza.  I bet some of the SubChat guys will be there.

You can see pictures from last year's holiday trains here.

Posted by onemorefoldedsunset at Saturday, November 30, 2013