Before the elite came through, a couple of guys set up to serenade them.  Well, one guy had the instruments, and the other appeared to be ingesting something liquid? 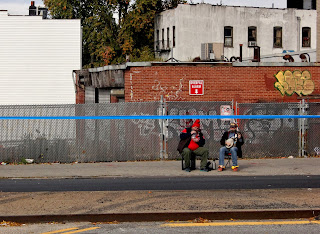 The crowd on Fourth was a cheery one, and there was plenty of music, much of it live. The mood was goodhearted and all was brotherly/sisterly love. The front runners were a pretty serious bunch, with undistinguished dress, so a couple of Aztec runners, shooting by in a blur of feathers, were a welcome contrast.  But too fast to catch with a picture.

The stretch below the Expressway still awaits the Funderpass treatment, and its western side proved to be a quiet spot to watch runners. 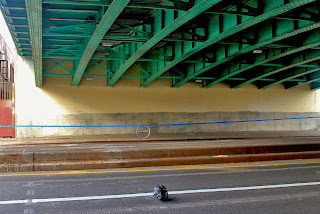 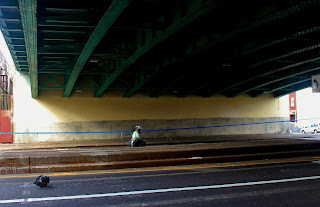 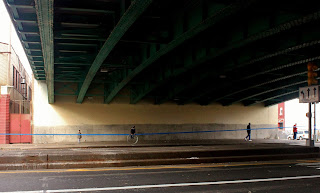 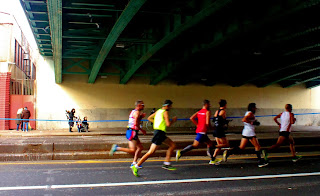 Farther down on Fourth, a gorgeous group of onlookers - runners themselves - watched the proceedings. One, though, became quickly distracted. 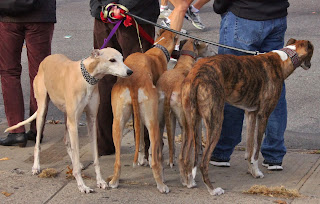 Around 23rd, I made a shocking discovery. The lurid green of Nice & Necessary  was gone! Instead, a coat of white paint, and curtains of blue and silver. Not nearly as exciting a vision. A middle aged woman emerged from the store to watch the race, and closed the door behind her swiftly. 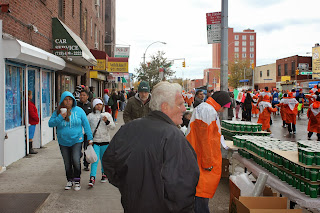 What a fantastic surprise effect (the runners suddenly apparearing)!