I was browsing the NYPL digital gallery the other day, when I came across a couple of photographs by Percy Loomis.  They were taken in the fall of '41, just as the Fifth Avenue El was being taken down.  The first, dated October 29th, shows the view north to 12th Street.  In it, you can still see remains of the El ironwork, a line of pillars shrinking towards the horizon. 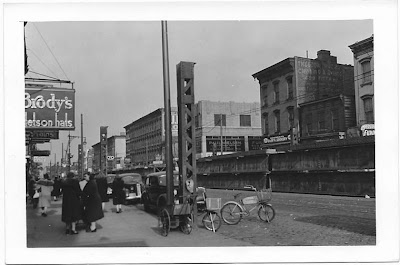 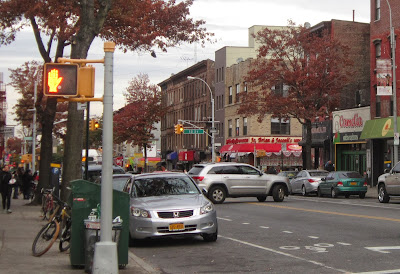 The second picture, taken just a few days later (November 4th), shows Fifth & 12th looking south, with Loomis standing more or less where Sleepy's is today.  There are no El traces to be seen. 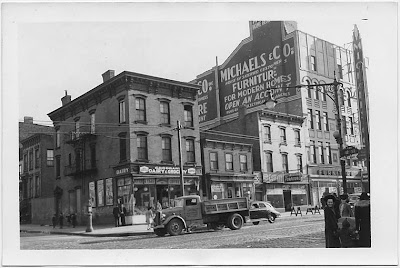 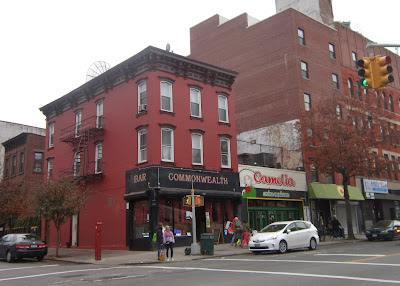 I like seeing the El height wall signs. A Michael's one was still around when I first got here, but was covered a few years later as next door's building grew higher. The J.J.Friel ad, half hidden in the October picture, can still be seen today. And look at the store signs & businesses lost in the past: the Dairy & Grocery where Commonwealth is now, and that fabulous vertical Michael's sign, with its swishy deco styling.  Is Brody's selling stetson hats - something I thought of as more western than mid-Atlantic?  But I'm no hat historian.  Or any kind of historian for that matter.   In just two pictures there are so many details to take in: the cobblestoned avenue, the cars and trucks, the firebox on the corner (still one there today), the handcart at the corner. That small frame building next to the grocery, still surviving, sans period charms.  The people. Those boys dawdling up 12th might still be around today, somewhere in their eighties, and perhaps one or two of them still cross paths. I'm drawn especially to the women at the bottom corner of the same shot.  In cloth coats with fur-trimmed collars, two holding the hands of a small, woolen-hatted child.  A couple of them face the camera, and while one's expression is too blurred to read, the other looks forward with an broad, open grin, so curiously meeting the lens she could walk across seventy years to greet you.
Posted by onemorefoldedsunset at Sunday, November 10, 2013

It's so nice to see some of the older buildings still in place!