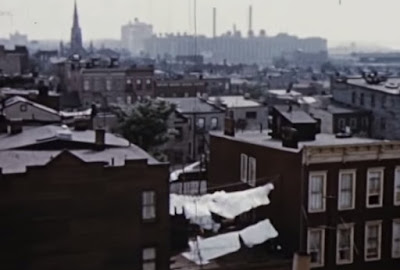 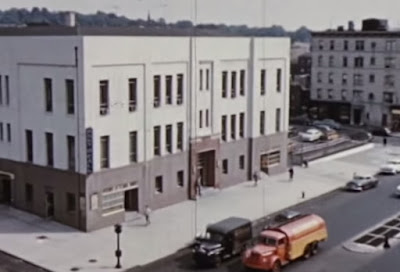 Screenshots from The Seafarers (1953), directed by Stanley Kubrick

How nice it is to report on Brooklyn native Virginia Maksymowicz's reunion with a mermaid. Two years ago Maksymowicz, an artist and art professor currently living in Philadelphia, wrote in and described fond memories of the Seafarers International Union headquarters on Fourth Avenue (now the Al Noor School) where her father Hank tended bar. The bar, the Port O' Call, was something quite out of the ordinary.

My father, Henry "Hank" Maksymowicz, a former USN Chief Petty Officer, was the bartender at the Seafarer's Union when it was at 675 Fourth Avenue.
Sometimes, when I was a little girl, he would take me to the bar on Saturday mornings when he would have to take inventory. I remember that the bar itself was in the shape of a boat, with a mermaid in the front. He would make me a "Shirley Temple," which I would sip while looking up at that mermaid. I also remember how he "tricked" me at Christmastime. Rather than mailing my letter to Santa and risk its getting lost by the USPS, he convinced me to hand it directly to him. He said that one of his seafarer friends sailed to the North Pole on an icebreaker every November; he would hand-deliver it for me!
He died from lung cancer on January 6, 1965. When the funeral procession left St. Patrick's Church, on its way to the National Cemetery on Long Island, it made a slow pass in front of the Seafarer's Union.

With a little digging around, I found a film about the Union headquarters, directed by none other than Stanley Kubrick.  The union-sponsored documentary, The Seafarers, is hardly one of Kubrick's great art works, but it gives a fascinating picture of the place, shortly after its lavish refitting, and reflects a time when the waterfront piers were still active with ships, sailors and longshoremen.  Best of all, the film reveals the Port O' Call in its glory days. 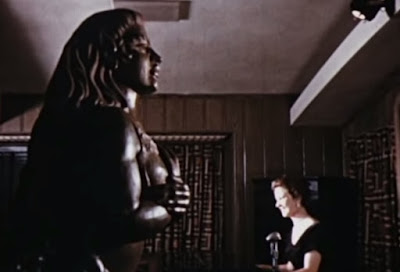 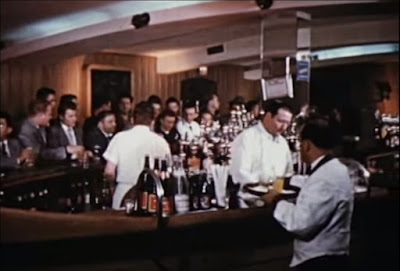 Screenshots from The Seafarers (1953), directed by Stanley Kubrick

In the early 1990's the Union moved a block north to smaller premises at Fourth & 19th Street, where it remained until 2014, when the building was sold.  The Seafarer's Union moved to New Jersey. We wondered what had happened to the bar during this time. Was it still intact, and most important, what had become of the mermaid?

While Virginia was working on figuring this out, she sent me a picture from 1964. Here she is in the bar (at left).  Her father took the photograph. 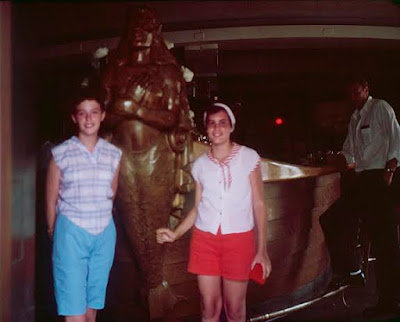 Shortly after this she sent me good news, a letter from Mark A. Clements, the Content Curator of the Seafarers International Union. Here's part of it:

I had a hunch as to the correct answer to your question, but I just needed to confirm it: the figurehead was relocated in 1984 to the SIU-affiliated Paul Hall Center(for Maritime training)in Piney Point, Maryland. It can still be found there today, at the Mooney Pub/Anchor Bar located in the Center’s hotel. As with its original placement in Brooklyn, it’s on the prow of a boat-shaped bar.

When she sent me this, two years ago, I kidded about a road trip to Maryland, and lo & behold, it finally happened!  Last week she wrote to me again:

A few weeks ago, my husband and I made a visit to Piney Point, MD and visited the mermaid!
Needless to say, I got a bit teary-eyed, since I hadn’t seen her since my father died. One of the seafarers told me that they had disassembled the bar in Brooklyn and moved it to Paul Hall. Amazingly, it was impossible to find any evidence to that effect. Everything, including the mermaid, looked great!

Over fifty years later, another picture with the mermaid. 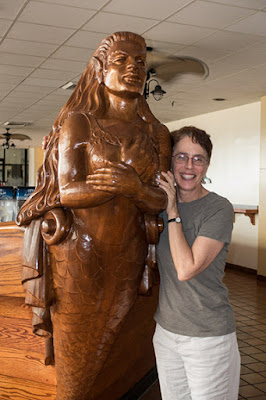 Thank you so much, Virginia, for writing in and keeping me up to date with the story as it evolved. It's a beautiful one, and I'm so glad to have been able to share it - a piece of personal history, and a piece of the history of the neighborhood. This kind of story is one of the best rewards of keeping a blog.

Of course, one story leads to another, and a year later a reader from Texas sought my help with another Seafarers mystery.  You can read about it here.  Right now I'm involved in yet another local detective story.  More to follow (I hope).
Posted by onemorefoldedsunset at Tuesday, November 07, 2017

Hi Virginia. If I remember correctly this mermaid was a big influence on your sculpture.