"In the Heart of the Gowanus" 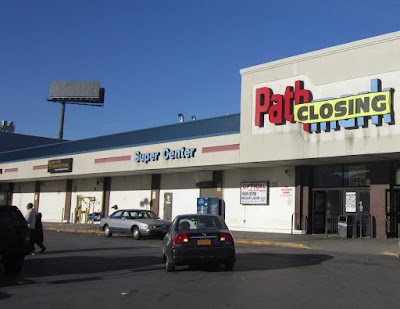 Just over a year ago, there was talk of a Stop & Shop taking over the Hamilton Plaza space previously occupied by Pathmark, an exciting prospect for those who missed the affordability and convenience of the former supermarket, and lamented the loss of jobs the closure had caused.  But no replacement appeared.  Now the owners, Joyland Management, are leasing the whole warehouse space - 70,000 square feet - along with the 100,000 sq.ft. parking lot.  Though the leases of two newer businesses, Retro Fitness and gin-maker 21st Century Spirits, are indicated as good through 2026 and 2023, the leases of the smaller, older stores - two fast-food chain stores and the liquor store, are not specified.

We'd still like to see a fair-priced supermarket back, especially one that offered fresh produce, a broad range of international and regional groceries, and full-service meat and fish counters.  Both the soon-to-be-closed Fifth Avenue Key Food, and Pathmark provide(d) food to a diverse economic and cultural customer-base. That means more than providing a token few shelves of Goya products.  It means all kinds of foods that are familiar and comforting, foods that feed souls as well as stomachs.

At the other end of the supermarket scale, the Bravo supermarket premises, at Fifth and 16th, are currently listed for lease.

Rare one of a kind extra large space. Currently used as a supermarket. Most uses considered.

Right now Bravo is still open. Its lease expires at the end of February.

Posted by onemorefoldedsunset at Monday, November 20, 2017