In recent years Sunset Park's Third Avenue has seen a rapid overturn of property. Especially on the northern stretch of Third, close to the waterfront, land is hot.

Recent arrivals and newly sold holdings along the water include the Lafarge Cement Terminal, the Sunset Industrial Park, the SIMS Municipal Recycling Center, the Liberty View Industrial Plaza, and Industry City (part of the original Bush Terminal, now being developed by major shareholder Jamestown Properties).  The Ferrara Brothers concrete company will be moving here from its Hoyt Street location in two or three years (right at the spot pictured above), after decades of leasing the land it once owned, which was seized by eminent domain in the '70's.
(One More Folded Sunset)

Smaller businesses are shifting too.  The warehouse at Third & 26th, home to Rossman Farms, is on the market, to be delivered empty, or with the storage basement leased to the current owners.  The discount fruit & vegetable store, known for its unbeatable budget prices, has been open on Third since 1990, with the building used purely for wholesale storage prior to that. The owners have another store on Avenue M. 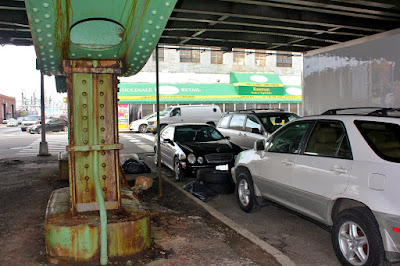 A couple of blocks north of Rossman's, a corner lot currently occupied by the Lopez Byway autoshop is also up for sale:

Amazing Development Opportunity. This 110 Ft X 25 Ft Lot Is Currently Being Used As A Car Repair Shop And Garage, But Will Be Delivered Completely Vacant, And Without Equipment. You Can Build An Office Building, A Hotel, A Warehouse, Or A Residential Building. Drive By There, Check Out The Site. Please Don’t Speak To Workers Inside The Repair Shop.

As the sign attests, Lopez has been on Third for decades. 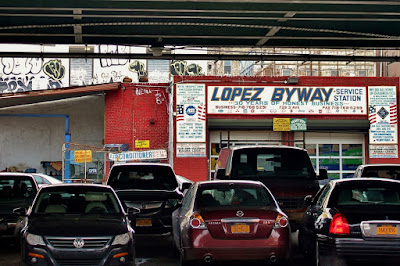 A little farther south on Third, at 40th, the legendary shoe and work-clothes outfitters Frankel's will be gone by the end of the month, relocating closer to the owner's home in Jersey.  Frankel's hopped over the avenue to its current location when Robert Moses put the Parkway in, but it's been around since 1890 - an impressive run.  Third-generation owner Marty Frankel will be holding on to the building, but at 76, it's time to leave Sunset Park.

More and more, old-time locals come in and tell him their landlord has sold their building and they're getting evicted, moving to Pennsylvania or some other state. The neighborhood is changing again. A nearby Costco has taken a bite out of Frankel's -- "It hurts. Costco gets all the deals" -- and the newcomers to the neighborhood haven't helped.
"Hipsters ...They try on twenty pairs of shoes, but they won't buy here because the store doesn't look nice. They like to take pictures of my barcodes, though, and then buy the shoes online."
(Jeremiah's Vanishing New York) 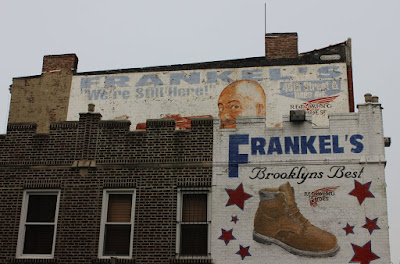 Posted by onemorefoldedsunset at Thursday, November 16, 2017