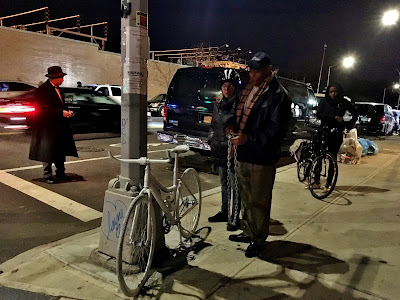 Why Greenpeace Supports a Just Recovery in Puerto Rico (Greenpeace)
... This first brigade includes representatives from CJA, Greenpeace USA, Uprose, Movement Generation and the PR Resiliency Fund. ‘Our Power Puerto Rico’ has 25 partners and growing across the U.S. and Puerto Rico. Organizacion Boricua is also a member of Via Campesina and works with communities and family farmers in rural areas across Puerto Rico, including youth and women collectives working to transform food sovereignty of the island.

Don't believe the BQX Hype: Why some surprising people are really not into the BQX (Technical.ly)
From urban planning and tech corners, there's resistance to a proposed streetcar that would otherwise seem to make transportation easier and faster.

Now at the Museum of the City of New York: Mod New York - Fashion Takes a Trip (MCNY)

At the cafe of my dreams! Maria Pellicci, The Meatball Queen Of Bethnal Green (Spitalfields Life)

Failed By The State: The Struggle in the Shadow of Grenfell (Part 1) (Youtube)

British Library Sounds (Sounds)
Listen to a selection from the British Library’s extensive collections of unique sound recordings, which come from all over the world and cover the entire range of recorded sound: music, drama and literature, oral history, wildlife and environmental sounds.

Posted by onemorefoldedsunset at Wednesday, November 29, 2017