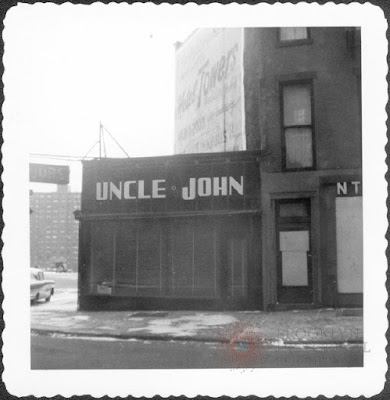 John D. Morrell worked as a librarian at the Long Island Historical Society. In his spare time, in the late '50s & early '60s, he engaged in amateur photography, and the now-named Brooklyn Historical Society has over two thousand of his photographs. The bulk of the photographs are of locations in South Brooklyn. The pictures he takes of older areas, like Downtown or the nearby Heights, like Fort Greene, Red Hook, or Gowanus, show a non-conforming variety of architectural styles, but as you head farther south, newer blocks offer staider vistas. Here you feel the flatness of the landscape in full force. Most of his photographs are in black and white, though every so often they burst into period-postcard chromogenic color. You can quench your thirst for mid-century stores & cars with Morrell. There's a riot of neon & fins. Still, the absence of people in the pictures make what must have been bustling streets and avenues sometimes makes them feel slightly buttoned-up and claustrophobic. You'd like them better populated.

The Downtown photos, like the buildings themselves, are more mixed in their character. Morrell lived as well as worked around here, and you feel in these photographs his personal connection with what he sees. In a brief experiment (what possessed him?) Morell takes interior shots inside a diner, and the blurry snaps exude all the muggy, steamy comforts of melts and soups and cigarettes. And suddenly, people! Hats hang on stands next to tables where bare-headed balding men in suits are serious about their food.  It's almost too intimate after all the emptiness we're used to. Morrell also shows of scenes of urban renewal: a building waiting in a sea of rubble, next in line for the wrecking ball, or, already half-gutted, exposing a beehive of wallpapered rooms to public scrutiny. Though the bulk of the collection ends in the 60s, a handful of quite ordinary shots appear a decade later.  The 70s pictures are muddier colored, and the cars have shrunk.  There are several pictures of fire damage, and the rest are of Hicks Street, most likely taken from Morrell's own apartment. They're casual.

Who was John D. Morrell?  It's ironic that a historical society has almost no biographical information about a former employee, especially one who left it such a fine record of the borough.  I hope it finds out more about him one day, and maybe gives him an exhibition.  I did a little digging around, and found what I believe (see above) was his Hicks Street address.  I know the BHS can do better than that, but here's what they have thus far:

John Morrell was a graduate of Pratt Institute and the assistant librarian at the Long Island Historical Society (now the Brooklyn Historical Society) under Head Librarian, Edna Huntington for many years. Little else is known about him.

Posted by onemorefoldedsunset at Thursday, August 17, 2017