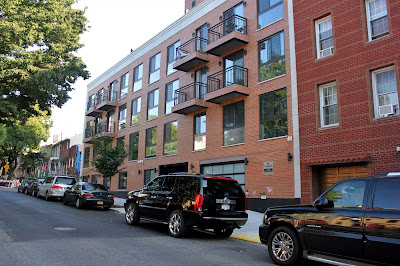 How quickly streets change.  I've been watching the rise of the rental building on 19th Street (Fourth & Fifth), and now there are listings advertised.  On StreetEasy the asking rents for one to three-bedroom units are $2,500 to $5,500. I've looked on several sites but haven't found any floor plans. From the listing blurb found on Trulia, we learn of "condo quality bathrooms" & local attractions:

Located between 4th and 5th Avenues in burgeoning Greenwood just over the border from the South Slope. The 25th St R train is 5 blocks away and neighborhood highlights include easy access to the expressway, plenty of new restaurants and iconic buildings like the Grand Prospect.

If you look at the apartment photographs you'll see the decor features lots and lots and lots of ... gray.  A bit of gray can be charming enough - I like it myself in moderation.  But inside & out it's sweeping the city in its sad, deluxe neutrality.  It's hardly a color at all.

There was nothing neutral about the buildings the apartment building replaced.  Miraculous survivors, these small, nineteenth-century houses made it all the way to the twenty-first. Most blocks round here, where frame buildings predominate(d), featured these kinds of anomalies - back houses sitting at the back of otherwise empty lots, or houses set so low you could tell they'd survived major street-regrading.  Each block with variety - in its people as much as its architecture - and each with its own small mysteries. 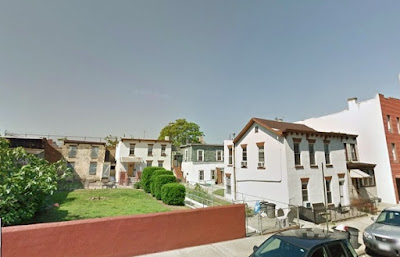 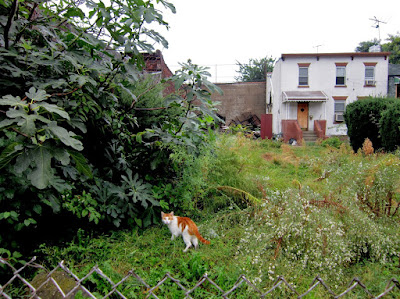 What's life without mysteries & colors & all the celebrations of our infinite varieties?  It's no sort of a life at all.
Posted by onemorefoldedsunset at Monday, August 21, 2017