I haven't been paying attention.  Lucky 7 Gourmet Deli Inc, at Fourth & 11th, has now become Jasim #1 Gourmet Deli Inc.  I went inside to ask the new owner when the change took place & he said he'd been there a couple of months.  The store is named after his five-year old son, whose picture you can see above the store entrance.  He said he hoped Jasim would bring the business good luck.

Just like Lucky 7, Jasim #1 serves hot food, and the owner said his food was "100 times better". We won't get into that one - Lucky 7 had pretty good stuff - but I got a free sample of lamb & chicken with rice from the new menu and was impressed.  Stop by & check it out. 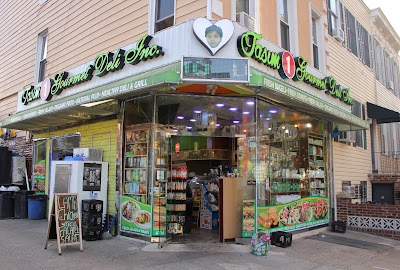 Posted by onemorefoldedsunset at Thursday, August 31, 2017