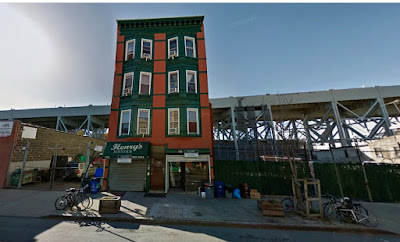 With both storefronts now empty, they've been re-positioned for 2017.  The rent is not exorbitant in today's market, and I hope someone can find this the place to build a small, honest business, but you have to wonder what's next. 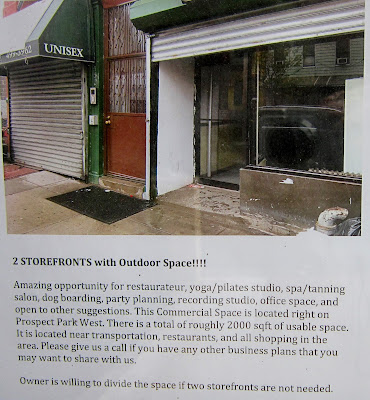 Some address confusion here, but the buildings are unmistakable

I love this old block, with the buildings on the south side crammed right up next to the viaduct.  If you wanted to play the game of historical significance, I'd place it over any handsome brownstone row. Here, perched near canal and factory, is a block less vaunted for its architectural merit, less lauded for the lives and labors of its residents.  History here's a rougher, dirtier, less conformist creature, awarded less attention.  Some of the street's wooden frame houses have vanished over the decades, but there are still plenty of them left.  A couple of them hide under stucco or brick-face, and others are by now fragile with age and hard use. Several that remain are clearly mid-nineteenth-century, including yes, oh yes, that house of my dreams a few doors up from (the former) Henry's barber shop. Ninth is a busy, noisy corridor, all too prone to flooding, and maybe the noise and the water and its mixed-use status have kept it from changing, at least on the surface, as quickly as other nearby streets.  It doesn't announce itself yet.  I'm always waiting for the obvious tipping point - the house popped up and out and painted all in black and grays, the small insouciant bistro. They'll be here soon enough. 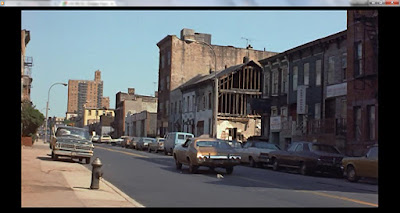 The block in 1973, with many more frame houses (and a couple of small apartment buildings) on the south side.  Screen shot from the movie Shamus.

Posted by onemorefoldedsunset at Tuesday, May 23, 2017