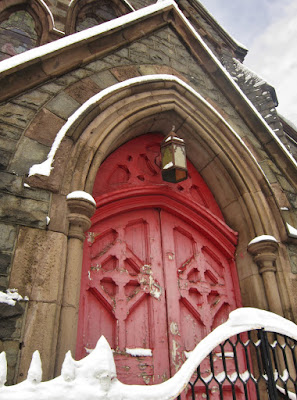 And he's back ... Adam America is in talks to buy the Church of the Redeemer site at 24 Fourth Avenue. On the cards: mixed development set to include 72 condos.  Closer to home, Adam America has new buildings under construction at Fourth & 15th, and Fourth and 11th.  The A.A. sites at 15th & 11th have appeared on this blog quite a lot before - maybe we'll throw in a few links down the line.
(The Real Deal)

CityView: As They Rally Around Rezonings, Planners Often ‘Plansplain’ (City Limits)
... the “Friends of the BQX”—a developer-led lobbying group pushing the city to build a streetcar along a route that maps closely with their real estate holdings—held a walking tour called “Connecting Brooklyn and Queens.” This event was part of the Municipal Arts Society’s annual “Jane’s Walk,” a series of walking tours held around the world in honor of Jane Jacobs. In response, groups like UPROSE, Queens Is Not For Sale and the Queens Anti-Gentrification Project protested the event, calling it “Robert Moses’ walk.” In this case, the plansplainers lost—the protests garnered far more attention than the project, and the walk turned into a depressed “happy hour” instead.

Protest & Politics - This project, Protest & Politics, will be the world’s first map of the sounds of protest, demonstration and politics – with artists recomposing and reimagining these recordings to reflect their own experiences and lives.
We need your help to make it happen: do you have a field recording of a protest, demonstration or any kind of political activity somewhere in the world?
Send it to us and be part of a global collaborative project to record and celebrate how the sounds of protest and politics can unite us all, and will not be silenced.  (Cities and Memory)

MAP: Who Owns All the Property Along the Gowanus Canal
Reporter Leslie Albrecht's last story for DNAinfo  - a fine piece of journalism.  Thanks, Leslie, for your great local coverage.


Posted by onemorefoldedsunset at Thursday, May 18, 2017