Spring in January.  I took the N down to 8th Avenue, and wandered around a bit.  I'd ridden past some auto shop signs I liked a while back, and today I headed to 66th to get a closer look.  There they were, right across from the park.  In another life, perhaps, I could have been a sign painter. 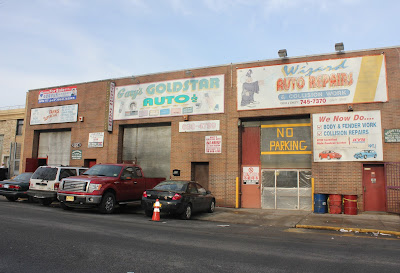 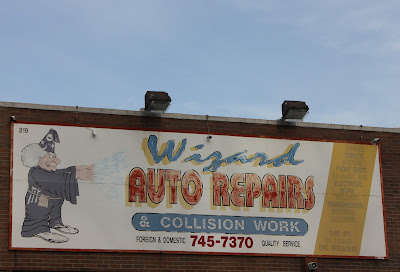 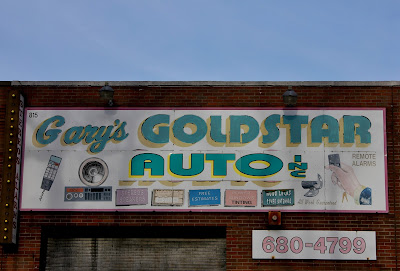 I couldn't quite make out what "AUTO" was covering up here, but the general effect still pleased, especially the lettering at the bottom, and the hand holding keys and a remote. 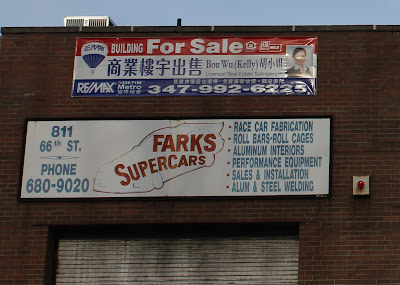 I once taught a composition class for trainee electricians, and my favorite student was a cute Bay Ridge drag racer named Jesus.  I half hoped I might run into him at Farks, but it was not to be, and Farks looked liked it wouldn't be around much longer.

It was so freakishly warm that a visit to the park was inevitable. Until recently I'd only known the thin string of parks along 66th/67th between Fort Hamilton & Ridge Boulevard as Leif Ericson Park, but the five original blocks of it are formerly designated as Valhalla Courts, after Asgard's hall of the dead.  A grand name! Approval for a park here was given in 1925, and a crowd of 15,000 was present at its dedication.   While the Scandinavian population of the area has almost disappeared today, you can find traces of its presence round here, in the park, in the still surviving football clubs, the Finnish-founded co-ops (now soaring in price), and in names carved in the lintels of brick rowhouses. 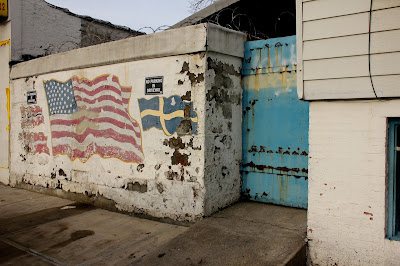 Valhalla here at 66th appears domestic rather than epic.  By the look of it, the Courts seem to hew to the original 30's design:

Parks landscaped and equipped the new facility in 1934-35. Each of the five blocks featured different amenities, including separate playgrounds for girls, boys, and small children; a planted park for passive enjoyment; and ten tennis courts. In 1939 Crown Prince Olav of Norway dedicated a monument to Leif Ericson at the Fourth Avenue entrance to the park. The two bronze relief tablets mounted on granite in the shape of a rune stone were created by artist August Werner. During World War II (1939-1945) the U.S. Army occupied the property; and Parks rehabilitated the site after it was evacuated in May 1945.
The park design features a Norse theme in honor of Leif Ericson and the local Scandinavian-American community. Among the many Norse motifs are a statue of a troll holding a “bearing dial” (compass), columns decorated like turrets of the Borgund Church, and medallions depicting snowflakes and Norwegian animals. Two attractive signs welcome visitors to the park: a new steel panel portraying a scene of rural Norway and a recently restored cast-iron sign shaped like a Viking ship.

The columns, at this end of the courts at least, are still intact, and those tree & flower motifs have a pleasingly retro look. 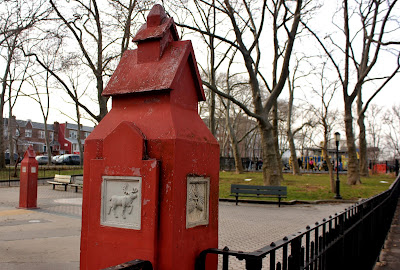 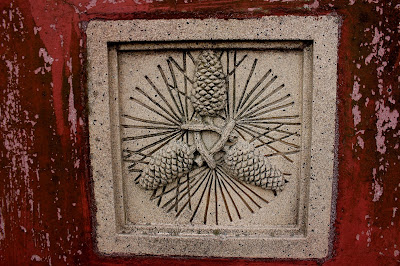 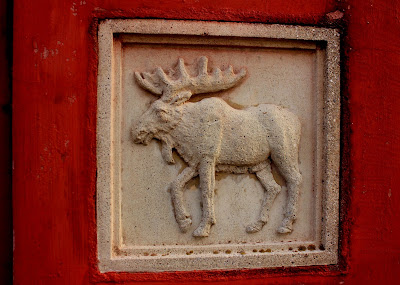 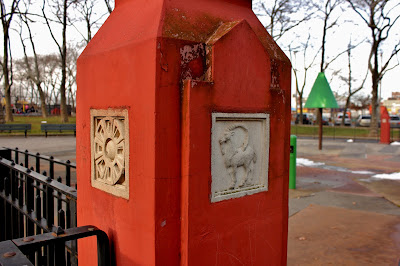 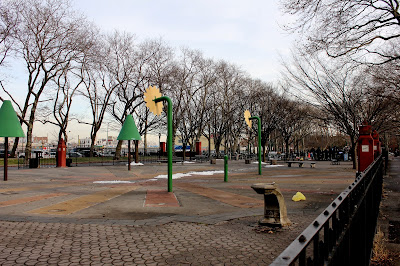 Today the park-goers are mostly Asian. The action's at the playground equipment and the ball courts, and at the tables and benches where crowds of men and women gather round the xiangqi players. It's a nice scene.

I walked up and down between Seventh and Eighth for a few blocks, and considered dropping in at the Soccer Tavern. No, I'd wait for another time..  A couple of years back I'd played the game of walking every block in Sunset Park from the water through to Borough Park, & coming back to blocks I don't visit regularly I always notice the roaring pace of new construction.  But there are lots of familiar sightings too. 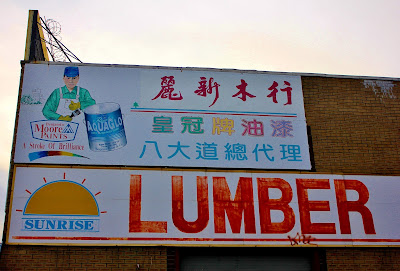 I kept to Seventh & headed north.  Before heading down to Fifth & home, I stopped for a while in Sunset Park itself to take in the views. 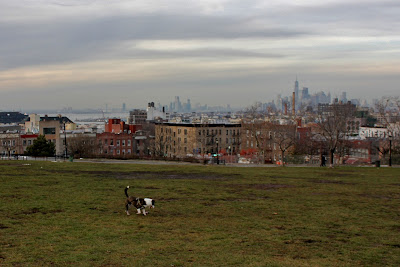 Coffee shops for newer residents are creeping in, on Seventh, and Fifth, and Fourth, the vanguard for a host of newer business models.  When I'm looking down from the park, I always check for La Gloria Novelties.  It's still right there. 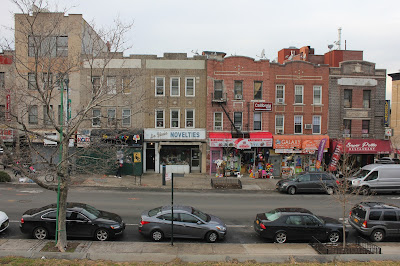 Posted by onemorefoldedsunset at Friday, January 13, 2017