The renovation and conversion of the landmarked Weir Greenhouse property, at Fifth and 25th, is certainly taking its time.  Plans for a Green-Wood Cemetery visitor center submitted in 2015 were not approved by LPC, and now Green-Wood is changing the center's design.  The footprint of the building will be bigger, and will include the all of the adjacent Brooklyn Monument Co. property on 25th.

Green-Wood was going to sell the vacant headquarters building to a nearby business, Baked in Brooklyn, as the Eagle previously reported.
Now, “Green-Wood has … decided to keep ownership of the property which houses the Brooklyn Monument Co.,” Green-Wood President Richard J. Moylan told the Eagle through a spokesperson.
“This will give us the opportunity to demolish the building, and design a different new construction visitors' center adjacent to the greenhouse,” he said.
Cemetery officials have decided to increase the size of the footprint of a new building that will be constructed on the property, the Brooklyn Eagle has learned. The new building will stand alongside the landmarked Weir Greenhouse, which will serve as the nucleus of the visitors' center.

The greenhouse itself will still serve as "the nucleus" of the center.

Farther down the block, the house that once belonged to florist James Weir's son and grandson is still standing.  The other day, at dusk, its decorations were still up, though the bust lurking behind them (a deviant Einstein type?) made for a rather sinister effect, like Halloween & Christmas all rolled into one. 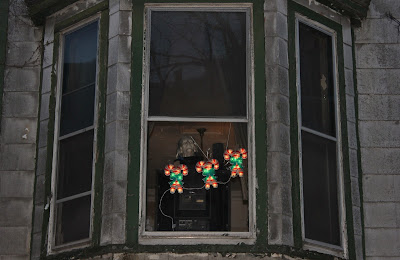 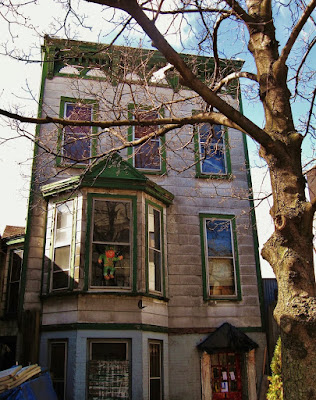 To Shannon's and Back


Posted by onemorefoldedsunset at Saturday, January 14, 2017