The court, the alley, the place. I wonder what it's like living on these smaller city streets, some with a narrower roadway, like Denton Place, almost under the Culver Viaduct, and others, like Warren Place Mews, that are wholly pedestrian.   I went inside a house on Warren, sometime in the 90s, & tiny as it was, I was sick with envious thoughts.  The houses at Woodrow & Roosevelt Courts were built thirty to forty years later than those on Warren, and you couldn't call them beautiful, like the Warren cottages, but they still hold an out-of-the-ordinary appeal, & I'd still like walking up one of the little pathways to get to home.   The Courts run either side of 30th Street for half a block, just below & parallel to Fifth Avenue.  Woodrow Court was built in 1910 & Roosevelt in 1920.  The houses on the Fifth side have bigger backyards, directly on the avenue, with garages or open parking space.  The chain-link around the greenery (or concrete where the greenery might be) on the Court side reminds me of a similar look at the big apartment building on Fourth (23rd/24th).  Imagine the courts with a real garden running down the middle. 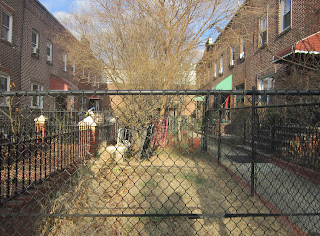 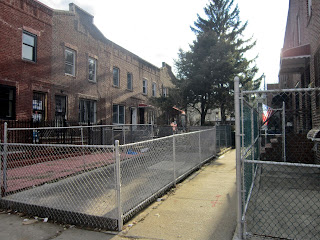 I live in Woodrow Court and have an old picture that shows what the court looked like with gardens down the center. What it looks like now makes me sick. The encouraging news is that the new owner of the first house promises to dig up the concrete and landscape it. We are going to work on the owner of the adjacent concrete garden to do the same. It looks like a dog run.

Thanks so much for commenting! I'd love to see how Woodrow used to look, and am happy there are plans to restore the gardens. It should look beautiful.