Then I started wondering about the location of the terrible-sounding Home for Incurables where Ella Wesner and her sister Mary spent their last days.  I ruled out the first Home for Incurables I came across, because it was founded in the Bronx.  It became St. Barnabas Hospital, still in the Bronx today.  The Faith Home for Incurables, at Park Place & Classon, though relatively close to Ella's Clinton Hill home, was also in the wrong borough.  I then considered the Free Church Home for Incurables at 149 Second Avenue (9th Street), in today's East Village, but it closed in 1915, two years before Ella's death. The only real possibility was the Hospital for Incurables on Blackwell's Island.  The name was a little different, but it was the only hospital I could find within the boundaries of Manhattan that fit the date.  If anyone can solve the mystery for sure, I'd love to know. 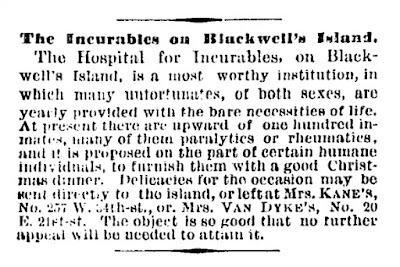 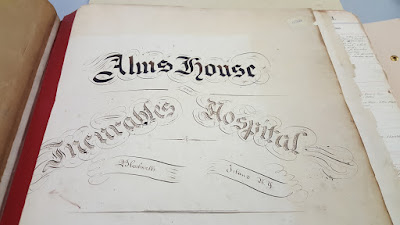 In addition to the Hospital for Incurables other nineteenth-century facilities on the island included a penitentiary, an almshouse, a workhouse, a charitable hospital and an asylum for the insane. What a grim place of exile for the city's unwanted.

Attached to the Almshouse are the Hospitals for Incurables, which consists
of two one-story buildings, 175 feet long, and 25 feet wide. One is devoted
to men and the other to women. In these buildings are quartered those who
are afflicted with incurable diseases, but who require no medical attention.

Through the years of the Almshouse and its related entities, Blackwell’s Island name also changed. It became Welfare Island in 1921, a name chosen to reflect the large number of institutions it held.
Institutions included the Almshouse, Charity Hospital, Metropolitan Hospital, City Home, the City
Hospital, Welfare Hospital, Central and Neurological Hospital, The Children’s Clearing Bureau and the Incurable Hospital. In 1968 residential development began on the island, thus ending the era of the Almshouse. To reflect the changing times, in 1973 Welfare Island was given its present name, Roosevelt Island. One hospital from the Almshouse era continues to function on the island, NYC Health &Hospitals Corporation/Coler, formed by the merging of Bird S. Coler Hospital and Goldwater Memorial Hospitals (formerly Welfare Hospital).  (National Archives)

The Museum of the City of New York has a number of photographs of Blackwell's Island in its collection.  They don't show the Hospital for Incurables, but they certainly summon the spirit of place. 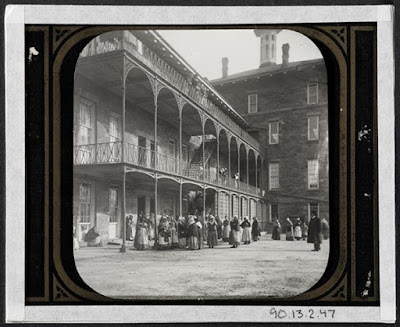 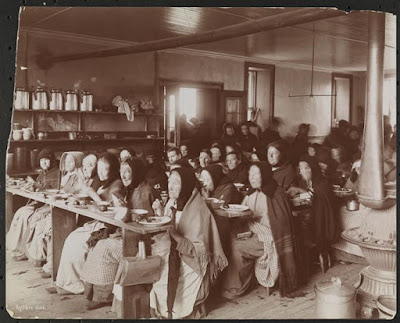 This may be of help. https://a860-collectionguides.nyc.gov/repositories/2/archival_objects/770

There are records of admission and transfers to Blackwell Island, under the Almshouse of NYC.