No wind & a temperature just above freezing make good walking weather, with no hats or gloves needed.  I hate hats and gloves. And at home I've been reading more - Moby Dick finally conquered! - and working my way through the NYPL Billy Rose Collection of theater photographs. I'm particularly drawn to the nineteenth & early twentieth-century popular theater & vaudeville pictures. Maybe it's time for a little winter series. 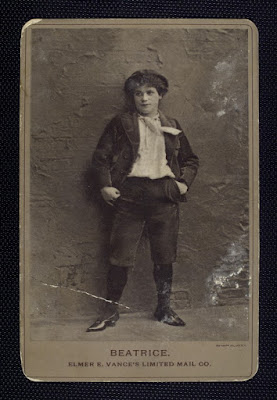 Many of the photographs in the Rose collection - especially the earlier ones - come with little in the way of documentation, but cigarette or publicity cards like this one are helpful. Elmer E. Vance's Limited Mail Co. right there under the subject's name does the trick. A review of a Vance production, Treasure Island, recently arrived at the Bijou Theater, on Smith Street, mentions the youthful Beatrice. 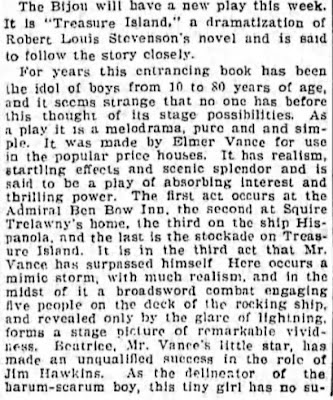 
"As the delineator of the harum-scarum boy, this tiny girl has no superior."

The Eagle article also reproduces the photograph of Beatrice shown above. Ohio-born Elmer Vance, who started his career as a telegraph operator (or lightning slinger) & train dispatcher made a rapid transition to dramatist and theater producer around 1890. By 1891 he was the manager of Niblo's Garden theater on Broadway near Prince Street. The production for which he became best known, the railway-themed Limited Mail (1892) brought him great success, and ran for years. One season alone netted $60,000 in profit.  Vance married (the much younger?) Beatrice (Conway) in 1894, in Camden, New Jersey. In 1905 Beatrice Vance appears in her husband's first musical production, The Girl and the Moon. The Washington Post describes her "remarkably beautiful soprano," but reserves its highest praise for her appearance on horseback as queen of the circus.

Niblo's Garden closed down in 1905.  Did the Vances stay successful or did times get leaner? A booklet printed in 1915 advertises Beatrice Vance, of Elmer Vance Theatrical Enterprises. as a "Prima Donna Soubrette," with a "Novelty Singing and Dancing Change Act." It's hard to tell, but things look a bit more modest.  Beatrice, though,  is as plucky and versatile as ever. 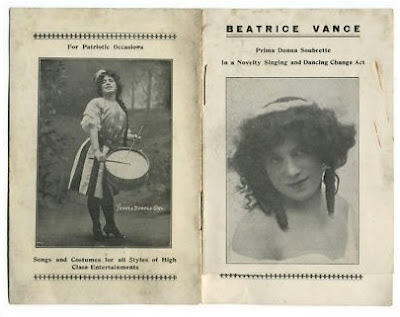 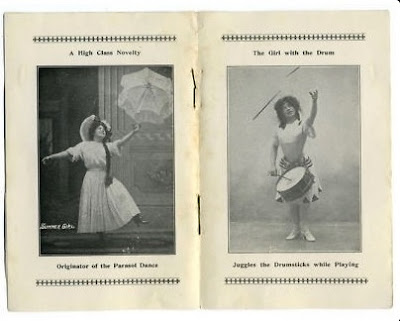 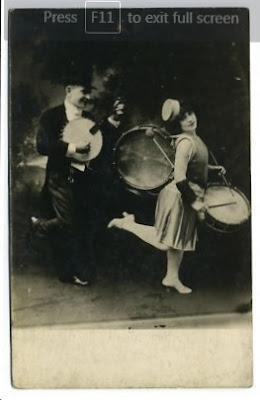 By 1915 the advent of silent movies was beginning to impact the careers of popular stage artists; some of them made the transition to screen work, and cinema and live acts were often shown in combination, but traditional vaudeville shows were on the decline. I'd like to know what happened to the couple after 1915, but the (amateurish online) trail ran cold.
Posted by onemorefoldedsunset at Monday, January 14, 2019