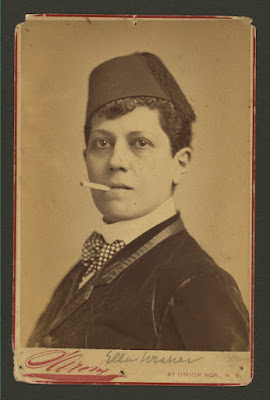 Ella Wesner and British-born Annie Hindle were the most popular male impersonators of the 1870s and 80s.  Wesner, born in the States in 1841, grew up in a family of vaudeville singers and dancers, and began performing as a child.  She is said to have worked as a dresser for Hindle at one time, and to have begun working as a male impersonator in the 1860s.  In 1870 she debuted at the theater of vaudeville impresario Tony Pastor. Her stage career ran until the turn of the century. 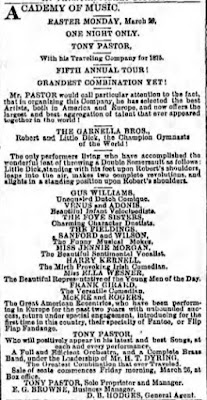 Both Wesner, "the veteran personator of swells" (Eagle) and Hindle were known for their 'realistic' impersonations, and described as convincingly masculine in appearance: "(Wesner) might easily walk Broadway in male attire without her sex being suspected" (The Clipper).  Gillian Rodger, in Queer Episodes in Music and Modern Identity, describes the routines and performance styles of male impersonation in the period. Performing in the mid-to-late 1800s, women such as Wesner and Hindle were allowed far greater sexual license & freedom of gender expression in male costume than in women's - both as artists and as queer individuals.  They could play themselves as well as the characters they impersonated.  Rodgers suggests that a strong element of their appeal to male audiences also lay in their varied and sympathetic constructions of class and masculinity.

Both Wesner and Hindle had publicly-known relationships with women. Hindle was married three times.  The third time - identifying herself as Charles - she married her dresser, Annie Ryan.  Details of the marriage were revealed in the popular press, but the two lived openly together until Ryan's death in 1891.  In 1872, Wesner, who was fast becoming a stage sensation, caused a scandal by eloping to Paris with Helen "Josie" Mansfield, mistress of both the Gilded Age Robber Baron Jim Fiske, and his murderer Edward S. Stokes.  The romance cooled however, and Wesner returned to perform in the States in 1873.  Any other relationships Wesner may have had with women went unreported.

The Eagle has adverts for a number of Wesner's performances in Brooklyn theaters. "Streams of Overjoyed People at Every Performance" boasts a notice for a 1889 show at the Gaiety Theater on Fulton near Hoyt. 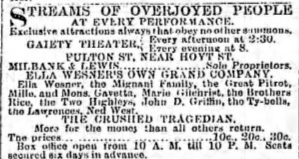 By this time, however, Wesner's career may have peaked.  A few years later, in 1896, her billing is a sad one:

"Among the performers will be Ella Wesner, who used to be the best male impersonator on the stage." 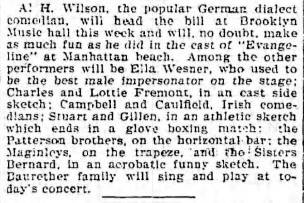 Gillian Rodger traces a change in society's attitudes towards male impersonation towards the end of the nineteenth century.  The masculinity that Wesner and Hindle embodied (and their audiences embraced) was no longer deemed acceptable.  Impersonators were expected to be seen as women 'playing' and never convincingly presenting themselves as men.  "Mannishness" was not welcome; a more feminine portrayal of manhood was required, as was (at least overtly) a clearer distinction between an impersonator's stage performance and a conventionally acceptable private life.

Ella Wesner gave her last performance in 1902. Her last home was a Clinton Hill brownstone; she died in 1917, in the Home for the Incurables.  She asked to be buried in one of her stage costumes. 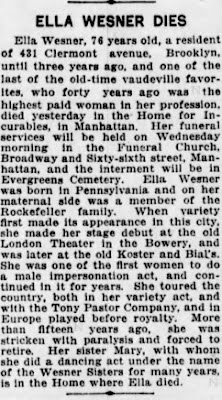 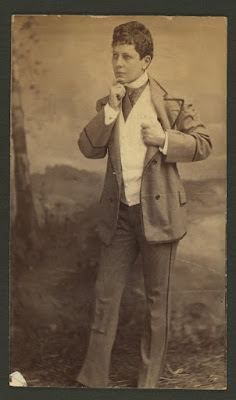