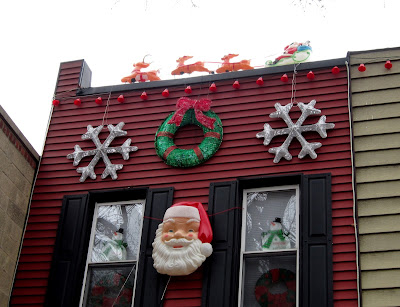 While it's still the Christmas season, let's head over to 10th & Third, where a quartet of houses collaborate on decorations.  My favorite's the one farthest east.  If you're like me, however long you've been riding the F train, you still like to stand near the doors for the stretch between Carroll & Fourth, and look out at the views.  Thirty years on I'm still not tired of them, despite the relentless softening of the landscape .  Right before you hit Fourth, you can look right down and see the reindeers running on the rooftop of this narrow frame house, but it's more or less impossible to get a picture from up high; the trees always manage to get in the way.  I've always willed Train Traffic Ahead to stop the car just at the point where I might get a chance at a shot, but it's never happened. Still, I like the view from the ground too.  How nice to see a string of lights right across the four buildings, and another across the street between two trees.  I'm not much on the Santa-flying- into-tree routine (a variation on a Halloween theme) but everything else looks good, and the Viaduct makes a perfect background.  The Oldsmobile is a plus too.  I'd rather see decorations like this than the Renovated-Gray-House-syndrome spare and symmetrical lights and bows.  Any day. Money doesn't buy cheer. 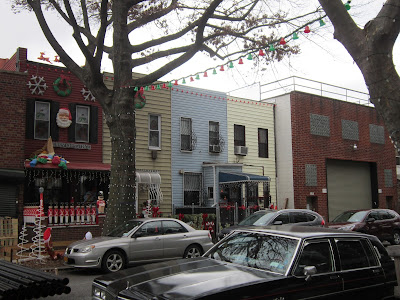 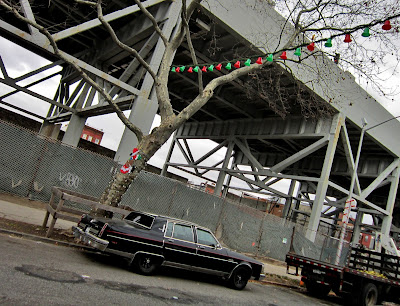 Posted by onemorefoldedsunset at Thursday, December 29, 2016