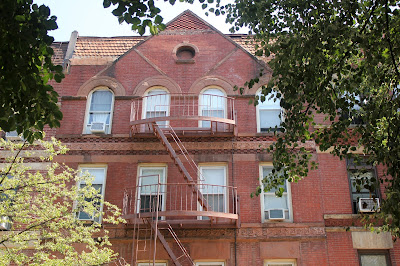 I've always been curious about the distinctive Queen Anne style apartment buildings that run from 11th to 12th on the east side of Sixth Avenue, and, in the case of 12th Street, continue several buildings up the block.  They clearly seem to have built by the same architect, though perhaps the interior layouts differed from building to building. The building on the corner of 11th is a co-op today, and I believe the buildings along 12th are still small-sized rentals - mostly studios - and for a long time at least, they were mostly rent-controlled or rent stabilized.  Some of the apartments on Sixth Avenue are condos by now - a two-bedroom recently fetched $1.75M.  The Henington print shop used to operate at 491 Sixth and I loved hearing the old press running when I walked by.  An inscribed marker above 489 and 491 names them as the Milton Apartments (1890). The wonderful Ephemeral New York blog had a post on these two buildings a few years back, and quoted an 1890 Eagle listing of their real estate transfer, with the owner's name given as George O. Van Orden There's an interesting comment on the post from a reader who lived in one of the Milton buildings and describes them as having been built as model apartments for Gowanus factory workers:

There was direct transportation to the factory located near the Gowanus canal and 11th Street. One of my old neighbors had found an early brochure. The apartments had more light and windows than the older style railroad style tenements, and the newest bathroom and kitchen appliances. Though the rooms were small, most were 2-bedroom configurations suitable for a family. Hallway doors had large glass panes that let light into the entry halls. 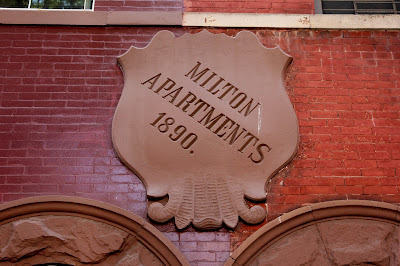 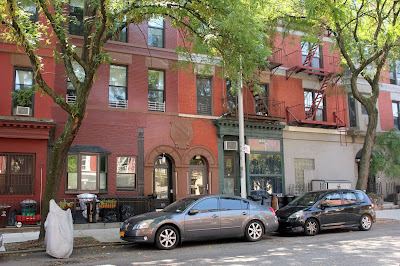 I got a little obsessed with finding out more about these apartments, but didn't come up with much. Yesterday I did a little more digging.  As I'd expected, Van Orden's name appears in reference to other buildings on Sixth/11th/12th, along with many other buildings in the area.  He was a busy developer in the turn-of-the-century building boom, which was described in the Eagle during a spell in 1890 as a "race between brick and frame."

I also came across an Eagle rental listing placed by Van Orden for the Milton buildings in 1891. It suggests that the whole row of buildings (on Sixth at least) was taken up by Milton apartments, and that they varied in size. 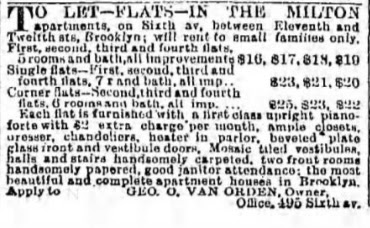 The apartments certainly sound very well appointed - I like the sound of the chandeliers and the optional pianoforte, but I wonder if these were really intended for factory workers?  They sound quite lavish. The ad is a tad hyperbolic though - just like realtor ads today.  Were the flats quite as fancy as billed? Reading the many references to Van Orden in the Eagle, you get the idea that he's a bit of a hustler, with his name occurring in reference to several property disputes, and a tantalizing story some thirty years later refers to a George O. Van Orden, 60, indicted on charges of grand larceny for a Wall Street stock swindle.  Could it be our Brooklyn developer, trying his hand at other forms of business?  Whatever the case, he left behind a good-looking group of buildings here. 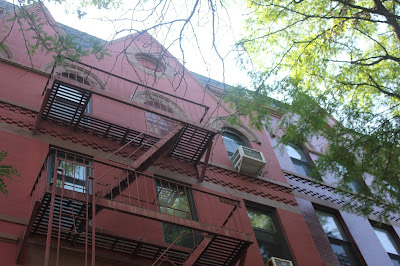 Posted by onemorefoldedsunset at Thursday, October 06, 2016