Earlier this year I spent some time learning about the squatter settlements in Red Hook and Gowanus, which were established in the nineteenth century, and later, during the Great Depression.  In the course of looking up newspaper articles about these communities, I came across a 1934 Eagle story about another small Depression era settlement nearby. This one was along the waterfront at 37th Street, in a Sunset Park neighborhood with a sizable Scandinavian population. "In a lot littered with tin cans and cast-off automobiles," ten men are described as bearing the bitter January weather without complaint "in true Viking fashion." According to the Eagle, the men, along with their cats, Minnie and Blackie, occupy four shacks, & fight off the subzero temperatures chopping wood, playing whist or checkers, and washing and mending their clothes. It is too cold, the rather too jocular reporter notes, for even these hardy men to look for work, or head to the coffee plant to search for spilled beans. 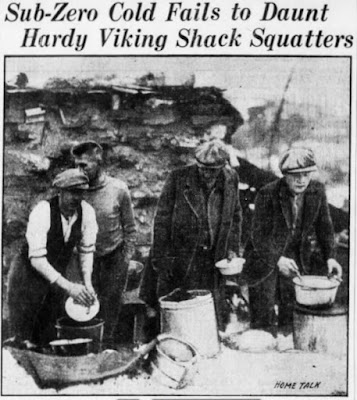 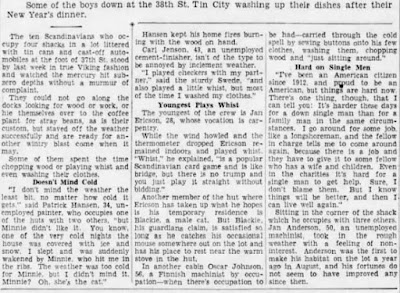 The various professions of the unemployed men, two of whom are described as Danish & Finnish, include painter, cement finisher, and machinist. One of the men, Oscar Johnson, 56, feels his existence is all the harder for being a bachelor, as preference in hiring is given to family men.

"I've been an American citizen since 1912, and proud to be an American, but things are hard now.  There's one thing, though, that I can tell you.  It's harder these days for a down single man than for a family man in the same circumstances.  I go around for some job like a longshoreman, and the fellow in charge tells me to come around again, because there is a job and they have to give it to some fellow who has a wife and children.  Even in the charities it's hard for a single man to get help. Sure, I don't blame them. But I know things will be better, and then I can live well again."

Posted by onemorefoldedsunset at Friday, October 28, 2016