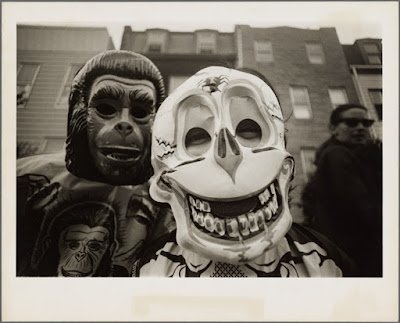 A couple of days ago, on a whim, I typed "Halloween" into the search box of the New York Public Library Digital Collections online website. The first few images that appeared were holiday postcards from the early 1900's.  One of them showed a pursed-lipped pumpkin that bore a troubling resemblance to Donald Trump.  Apart from this one, they were charming enough, but as I scrolled down, the search results transitioned to a set of black and white photographs that jumped right off the screen.   Kids from a bygone decade, in Halloween costumes, posed against a background of frame and brick buildings.  How they caught my eye - these devils, these superheroes, brides and ghosts, their futures undetermined - facing the camera with all the sudden sense of power a costume brings, and sometimes (surprisingly) revealed without their masks in all the tenderness of childhood. The pictures summoned up the pure magic of Halloween, when, for one day & night at least, you could step out of your day-to-day life and reveal your deeper, darker, bolder self. That brief time when the world shifted balance. The pictures were almost entirely adult-free, giving the suggestion of greater liberty for a kid on the streets of the city back then & they invested these miniature angels & demons with tremendous dignity, gravity & sweetness.  They also felt like the work of someone who understood children, could talk to them, and take them seriously.  I couldn't stop looking at the pictures, and the more I looked, the more the low-scale landscape looked familiar.  I supposed it could be one of a number of neighborhoods in Brooklyn or Queens, but yes, it really was close to home - South Brooklyn in the teens and twenties blocks.  By the expressway on Sixth, looking up 19th from Sixth to Seventh, snippets of schools & spires, doorways & chain-link fencing, flashes of a past that was still recognizable today. 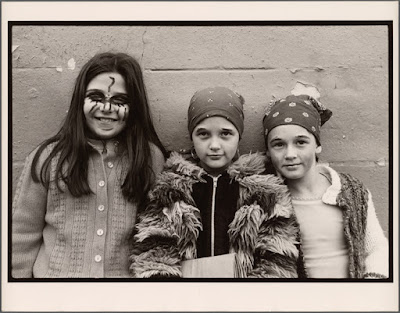 The photographs were taken by acclaimed photographer Larry Racioppo, between the years of 1974 and 1978.  The kids in the pictures would be in their forties and fifties today.  Racioppo, son of a longshoreman, grew up in the area, and one of the buildings he lived in, at Sixth and 17th, was torn down to make way for the Prospect Expressway.  His parents later moved to Sunset Park, but the hub of his Italian-American family life remained nearby, on 18th Street, and he has stayed closed to his old neighborhood.  After a spell in California in the late 60's, Racioppo returned to live in Park Slope, and with no formal training, decided to become a photographer.  He supported himself by various means, as a cab driver, bartender, & construction worker.  He also worked under the auspices of CETA, a federal jobs program, which was created in the 70's as an heir to the WPA program. Some of the 70's Halloween photographs were taken during his time with CETA. Eventually Racioppo found work with the City, as a photographer for the Department of Housing Preservation & Development, which offered him the opportunity to further develop his art while earning an income, and to travel all over the city with his camera.  Today he lives in Rockaway. 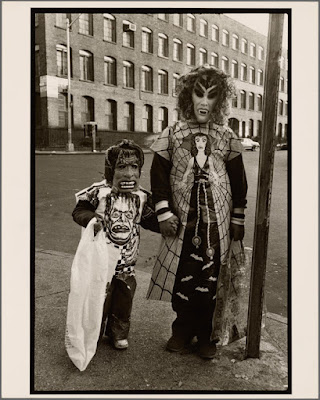 Racioppo's work has captured many aspects of city life, including the myriad faces of religious observance, the vernacular of street basketball, the grandeur of abandoned movie theaters, and the rituals of the Williamsburg Giglio.  His photographs are in the collections of many institutions, including the Brooklyn Museum, El Museo Del Barrio, The New York Historical Society & the Schomberg Center. Multiple honors include a Guggenheim Fellowship, & awards from the National Endowment for the Arts.  Racioppo continues to be fascinated by Halloween, and is always out with his camera on October 31st.  The 70's Halloween pictures appeared in an eponymous book, published by Scribner in 1980, and The Word on the Street: The Photographs of Larry Racioppo, was published by the Museum of Biblical Art in 2007.  His work is currently on view in the exhibition Five Cents to Dreamland: A Trip to Coney Island, at The New York Transit Museum, & will appear next week in a group show, Sanctuary, at the Tabla Rasa gallery in Sunset Park. 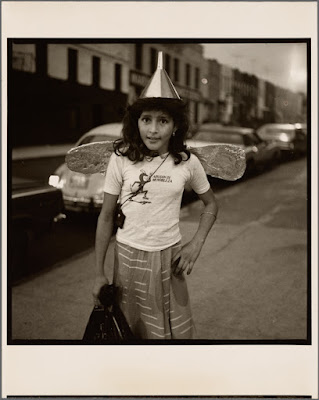 To Halloween again. To the plump-cheeked cowboy pointing a pistol at the camera. To the slender girl in an anti-hero Chapulin Colorado t-shirt & a fragile-looking pair of tin foil wings.  To the three boys with tears painted on their cheeks, one quite formally dressed in a broad collared shirt & jacket, the second with a head-turned hint of a sneer, and the third strumming a tiny toy guitar. To Bambi, the Bionic Woman, & Cinderella, masks on & off.  To the Rubber Devil, whose mask seems as much a part of the animal world painted on the wall behind him as of a block in Brooklyn. To the Bride of Frankenstein, who looks far too beatific for any remotely horrific deeds . To the ghost, in street clothes except for a veil of what looks like net curtain scooped up and fastened under his chin. To the kid in the black mask, hands on hips & exploring machismo, & to the shaving cream fighters, in no need of costumes to assert their presence.  To little, beaming  Lucy and her larger, scowling companions, who look as severe & repressive as Sendak's elderly aunts or grandmothers.  To Doctor Zaius, revealed as a bit of a wise guy, & to Superman, half-smiling, with his plastic cape rising in the breeze, which seems to arrive right on cue.  To short figures with large, masked heads, that look like creatures out of latter-day Grimms.  To inexpensive costumes & home made touches, as powerfully affecting as anything fancy.  To dressing up, hitting the streets, and being your heart's desire. 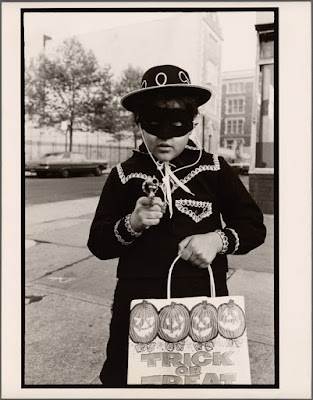 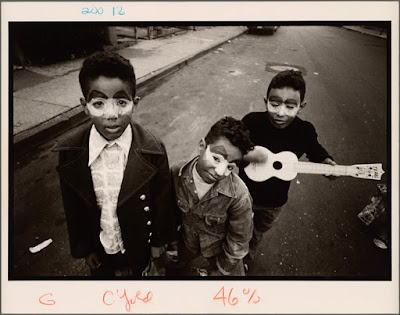 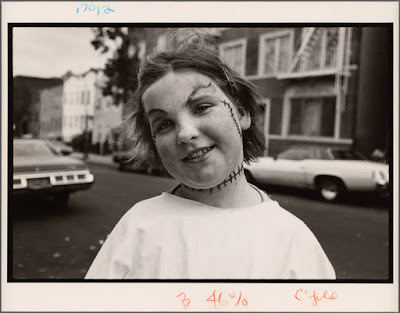 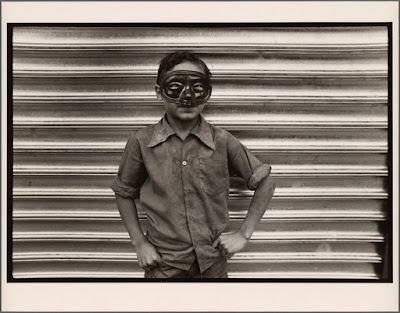 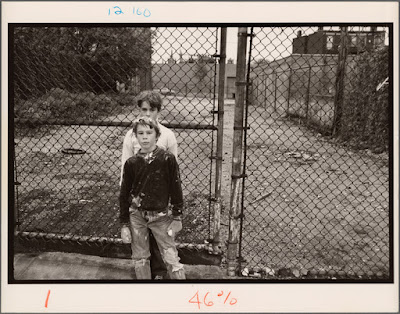 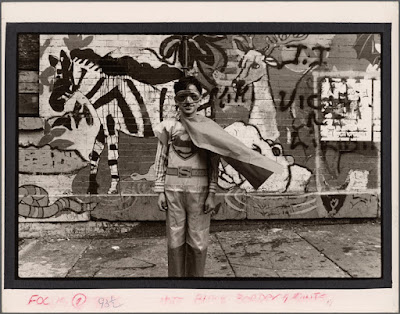 Many thanks to Larry, for giving me permission to include his photographs here, and for taking the time to talk.  For more information on his work, read here.


Posted by onemorefoldedsunset at Monday, October 24, 2016