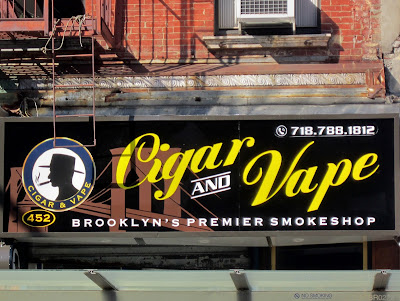 A new sign at Fifth & 9th replaces one for phone  & computer repair, phone cards, candy & smokes. It's almost a classy sign for a smokeshop. There are certainly lots of these kinds of businesses around these days - so many in fact, that one wonders how they pay the rent.  Another one arrived a couple of blocks south recently, replacing the Franchezka Unisex hair salon.  The Fifth & 9th corner wouldn't win any beauty contests, with Deals & Discounts (DII),  a deli & smokeshop, the Park Beer Store (formerly just the plain S&P newsstand) & a bank holding the corners, but despite an overabundance of beer & nicotine, I like the way the intersection hasn't at least gone all upwardly mobile on us. Beauty isn't just in looks, it's there in spirit & resilience, and the feeling of a place that attracts all-comers. You get that here, with streams of people passing through, arriving via bus or train, or on foot. It's a hub. The discount store & fast food are popular draws. Daisey's diner, Smith's (the last old bar on the avenue), the Square Store menswear shop & the Fifth Avenue Diner are all close by, along with a liquor store & the Record & Tape Center, blessedly still hanging around against all expectation.  Pharmacies abound, most of them with sluggish, indifferent service, though Neergaard, the king of the bunch, is a happy exception.  El Viejo Yayo II restaurant is just up 9th, and a supermarket just beyond that. There's still affordability at the crossroads, and a blessed diversity of people passing through. Preachers still plant themselves on the Chase corner from time-to-time, and you'll still find Connie, our resident diva, panhandling, at 70, inside the bank itself.  There's a bit of hustle left here. The corner has weathered the ups and downs of decades, lost cinemas, department stores, an elevated train line, and more, but it hasn't lost a popular touch.  And the intersection marks a kind of territorial border for me.  Below 9th, I'm on home turf. 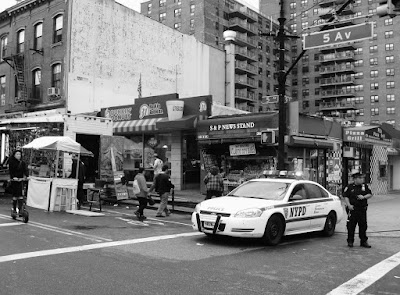 Posted by onemorefoldedsunset at Friday, October 21, 2016