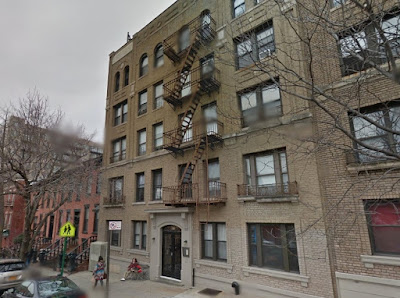 "There is considerable upside in the offering as the seven rent-stabilized units pay an average of $811 per month for two and three bedroom apartments worth approximately $2900 and $3900 per month. This property also presents a near-term opportunity for condo conversion as eighteen of the twenty-five units will be destabilized by the end of 2013. "

By all appearances it didn't sell, but it's currently listed by Cushman & Wakefield for the same price, down from $13.5M.

"The building consists of 25 residential units of which 13 are FM, 4 are RS, and 8 are currently vacant. The FM units were recently renovated and feature hardwood floors, large closets, full-size stainless steel appliances, and excellent light from windows in nearly every room. Five of the units are three-bedrooms and the rest are two-bedrooms, two of which may be converted to three-bedrooms... This is a rare opportunity to acquire a low maintenance, high cash flowing multi-family building in the heart of Park Slope, one of Brooklyn's fastest growing neighborhoods"

The building or its owners don't appear on Tish James' most recent worst landlord list, but a look at the DOB open violations for 219 13th shows a sorry picture, with Failure to Maintain, material false statements as to rent controlled/stabilized units in the building, & unsafe wiring. All open violations were issued after Silvershore bought the property.  This is not the first indication of dubious practices by these owners.  In 2014 Bushwick longtime tenants of a Silvershore building faced eviction from their apartments, despite alleged assurances from the previous landlord that they would be able to stay.   Earlier this year Silvershore was accused of "predatory" behavior by purposely neglecting a property in Ridgewood to displace Section 8 tenants:

In a protest outside the Ridgewood building on Tuesday, (Councilman Antonio) Reynoso accused the company of purposely failing to maintain the residential units in an effort to fail building inspections and lose the Section 8 subsidy — which covers the difference between how much the tenant can afford to pay toward rent and the rent itself — it receives from the federal government.
Once Washington cuts ties with Silvershore, the lawmaker said the residents would effectively be evicted, as they couldn’t afford to pay the full rent.
And once they’re out, the company could repair the units and lease them at far higher rates, leading to dramatically higher profits.

Silvershore Properties has purchased more than 60 buildings in Brooklyn, including in Crown Heights and Bushwick. “We discovered some lower-cost buildings in Brooklyn,” principal David Shorenstein said, observing that there are “so many different neighborhoods that haven’t yet been established,” at least from the perspective of the real-estate investor.
His company, Shorenstein said, invests to improve buildings with amenities like granite countertops, Shaker cabinets, and quasi-spa showers: “You have to spend a lot of money to get those quality tenants.”
Those tenants are often newcomers with parental guarantors. Some 85 percent of those renting 200 apartments from his company in the last eight months showed out-of-state drivers’ licenses, he said.


Posted by onemorefoldedsunset at Thursday, October 20, 2016