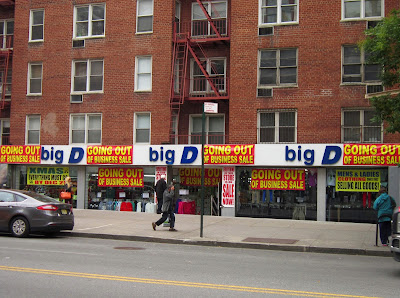 I walked along 14th Street on Wednesday, & saw that Big D would be closing soon: Everything Must Go By Dec 25.  The discount store, part of a regional chain, originally known as Dee & Dee, has been around on 14th since 1962.  Dee & Dee split into Big D & DII, but the Big D stores appear to have been less successful.  A Greenpoint Big D closed in April, BUT reopened in May as a DII!  The store on 14th is the only D of either variety left in Manhattan, and we'll have to wait and see if it stays as a discount center.  Somehow, I think the drive of the market to upgrade & reposition the city's cheaper, scruffier, corridors will finish this one off.  Some people look down their noses at places like this, but they fill a real need for (the plenty of) shoppers struggling on limited incomes, as do the smaller 99c stores. And there are plenty of smart shoppers, whatever their means, who seek out discontinued deals.
In much of Manhattan, and many neighborhoods of Brooklyn & Queens, these kinds of regional chains or individual discount stores are disappearing fast. The Conway chain folded in New York this year, with the exception of one last outpost in Middle Village, Queens, but there's still Jack's, for now, over on 32nd, the huge emporium described by a commenter on Yelp as "the poor man's Costco."  Business there is booming.


Posted by onemorefoldedsunset at Friday, November 07, 2014

I never shopped in the Big D, but I did outfit an entire apartment with things from Jacks on 32nd. I still have the flatware I bought there years ago. Odd Lot is another good one, especially for towels, rugs and kitchenware. With the cost of living being so ridiculously high, these discount store are indispensable.