Around 38th & 39th, three buildings that caught my eye. 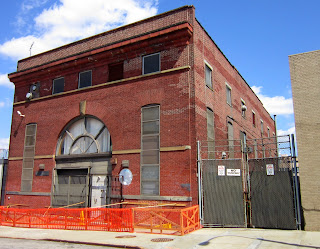 The 38th Street Yard is located between Fifth and Seventh Avenues in Sunset Park, Brooklyn, adjacent to the Jackie Gleason Bus Depot. This yard is not normally used for revenue-service train maintenance. Its primary function is to store diesel and electrically powered maintenance-of-way and other non-revenue service rolling stock. It is also used to transfer trash from garbage collector trains to trucks via platforms inside the yard just south of 37th Street. This southern part of the yard was formerly the center of the South Brooklyn Railway, which extended from Bush Terminal through the north part of the yard, then down Gravesend Avenue and into the Coney Island Yard. The yard is entirely equipped with hand-operated switches. Only Fresh Pond Yard and East New York Yard share this characteristic. (wiki transiTalk)

At 39th & Third, opposite the Rose Quartz Lounge, a radical paneling/stucco job (or something!), combined with a lively color choice.  The furniture warehouse is bigger than it looks, having a broad frontage on Third.  The makeover is shockingly heavy-handed (covered over entrances?), but not, at least, humdrum.  Why though, would you cover up anywhere in such a strange fashion?   Looks like a minimum expenditure maximum speed plan. t Yard is located between Fifth and Seventh Avenues in Sunset Park, 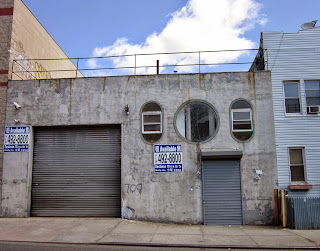 The windows inside the windows were not a great upgrade, but otherwise I kinda like the look here.
Posted by onemorefoldedsunset at Sunday, April 13, 2014