Yesterday's post concerned 635 Fourth, home to the Seafarers International Union and currently listed for sale at $24,500,000, with approved development plans in place.  I neglected to mention that 635 4th Avenue Holdings LLC bought the property from the Seafarers Union just four months earlier, for a trifling $10,000,000.   Quite a bump. (Update: No sale took place.)

I was looking around for picture of 635 in earlier days, and struck gold.  From a series of 1910 photographs chronicling the Fourth Ave. subway construction, this one, from 19th Street looking north, shows 635 (at right) in statelier days. 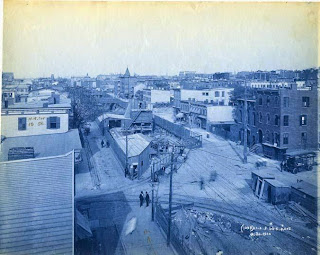 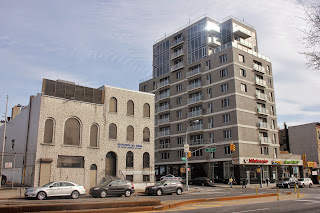 In the sixties  farmworker Ed Chiera passed this way, sent East to New York by Cesar Chavez to gather support for a national boycott of California grapes:

So, in February 1968, we left Delano for New York in a caravan of a few beat up cars, circa
1950s, and an old donated yellow school bus, which ran okay but lacked a heater to keep us
warm in the winter ride across the country. Stopping each night at cities along the way, we
rode for seven days, wrapped in blankets, eating cold sandwiches of salami, cheese, and
peanut butter and jelly, yelling ¡Viva la Huelga! ¡Viva César Chávez!, and singing many rounds
of De Colores and Huelga en General to keep us warm. Cesar had sent Fred ahead of us via air
to make arrangements for the organizers to live at the Seafarers International Union
headquarters and dormitory in Brooklyn.

However, Chiera didn't stay at 635.  SIU sources seem to indicate 675 Fourth (20th/21st) as the original union headquarters, & ACRIS records suggest a move two blocks south in the early 90s.  675 is (was) a much grander building.  Here's another picture from 1910. 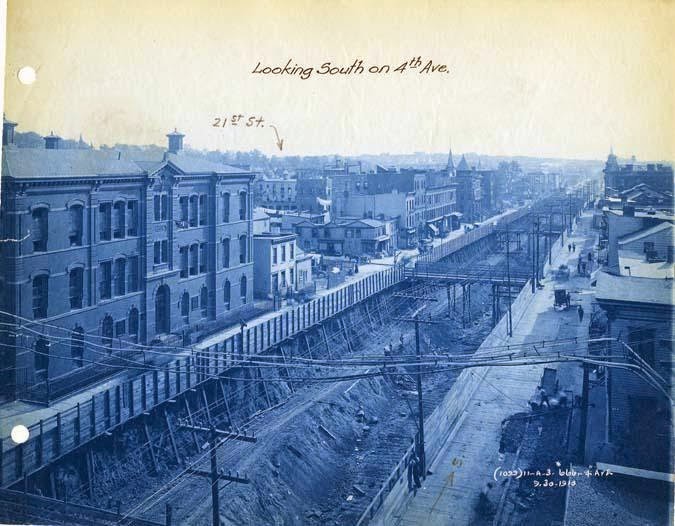 The Seafarers Union was founded in 1938, so the building (at left) clearly pre-dates union presence.  It also looks very much like a school building, so its transition is mysterious.  Anyhow, it's a school now - Al-Noor -- and like 635, it lost its looks over the years. 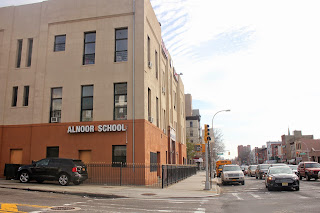 As a side-note, if you happen to be passing this way, drop in at the great Al-Noor Halal Deli across the avenue. The deli name is a little misleading: it's really a diner, especially busy at lunchtime when it caters to a (mostly male) crowd of nearby workers. The food is cheap, the servings big, and the atmosphere friendly.

Update - 6/25/15
After receiving Virginia's lovely comments (see below) I did a little more digging around, and found footage of the bar she recalled.  It's contained in an early Stanley Kubrick documentary, The Seafarers.  You can find it here.

Posted by onemorefoldedsunset at Tuesday, April 15, 2014

My father, Henry "Hank" Maksymowicz, a former USN Chief Petty Officer, was the bartender at the Seafarer's Union when it was at 675 Fourth Avenue.

Sometimes, when I was a little girl, he would take me to the bar on Saturday mornings when he would have to take inventory. I remember that the bar itself was in the shape of a boat, with a mermaid in the front. He would make me a "Shirley Temple," which I would sip while looking up at that mermaid.

I also remember how he "tricked" me at Christmastime. Rather than mailing my letter to Santa and risk its getting lost by the USPS, he convinced me to hand it directly to him. He said that one of his seafarer friends sailed to the North Pole on an icebreaker every November; he would hand-deliver it for me!

He died from lung cancer on January 6, 1965. When the funeral procession left St. Patrick's Church, on its way to the National Cemetery on Long Island, it made a slow pass in front of the Seafarers Union.

Virginia - thank you so much for your wonderful comments - I'm thrilled to learn about your father and your family connection to the Seafarer's Union. That bar sounds quite something! Do you have any photographs of the place in earlier years? I'd be honored to share them here, but completely understand if you prefer not to.
I'm fascinated by the local history of this neighborhood, and sorry that development is changing its character so rapidly.
Many, many thanks again!