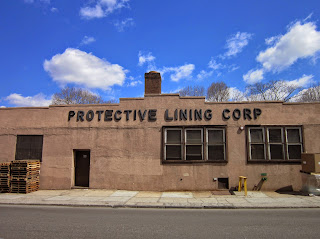 Though the pace slowed down in winter months, my walking project has now taken me from 9th Street as far as 40th. Now I'm Beyond the Cemetery, there's no natural barrier to stop me from going further east at Fifth Avenue, so of course this afternoon I walked on 40th at Third across as far as Ninth & turned back down 39th. I suppose I could have gone as far as Fort Hamilton Parkway, which I now think might be a good new boundary. We shall see. At the other side, winter really stopped me from heading onto Second (too icy & not that accessible ), so I'll have to get back to cover that area (from 31st or so) in the near future. I've been there before, along with plenty of other parts of Sunset Park, but want to walk every block in a fairly systematic way. And I'd better hurry up a bit - Time's winged chariot & all. Change is coming fast, with waterfront development and rapidly rising housing prices. A three family on the market for over two million - unthinkable even a year ago.   I wonder what Fifth & Fourth will look like in a few years, and just which tenants (business or residential) will be able to afford those rising rents? Cronuts in, tamales out, and maybe a Wafels & Dinges truck where Tacos El Bronco used to be? And even around the Expressway? Maybe it'll get a hip new acronym: DUNG (Down UNder the Gowanus)? EXWARE (Expressway Waterfront AREa)? GASP (Gowanus Area of Sunset Park)? It may seem far-fetched, but God knows, anything is possible.
Posted by onemorefoldedsunset at Thursday, April 10, 2014