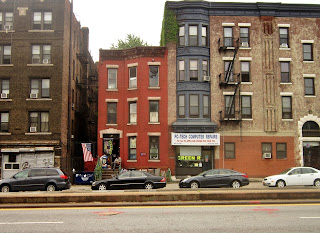 For months now, the elderly man at 461 Fourth has been shifting the contents of the building out front.  It's a sad, grubby accumulation of garments, books and knick-knacks.  There's more stuff piled out on the sidewalk too, or bagged in the alleyway to the side.  Life's been a hard business here for years, with broken windows on the top floor stretched with plastic, and a growing isolation from the world outside.  The guy living there is belligerent and verbally aggressive, and once, at 6:30 in the morning, screamed blue murder down the avenue until I took one of his greasy-paged magazines.  The other day he was hawking his wares with such futile hostility I was half-saddened and half-cheered by his fuck-you lack of servility.

This is a high-profile neighborhood these days, a Boulevard in the making.  The site across the avenue from 461, which extends five houses down 11th and far along the avenue block, is up for sale at twenty million.  A block away, a new French coffee bar & bistro is open to the street.   Even in disrepair, a two or three family brick building at this location might, in these crazy days, fetch a million and a half or more.  If you - or those who share the estate with you - get screwed over though, if maybe you aren't able to manage your affairs too well, or don't know you're sitting on money, someone (461 Fourth Avenue Holdings LLC) will take your home off your hands for chump change.  Say a tenth of that price.  461 changed hands for $125,000 last month.

Just recently, a Stars & Stripes was hung from the railing, along with a Veterans flag draped over the front door.  There's also a small new bar sign up on the wall, with a bottle pouring into a glass.  The yard is developing all the appearance of a wartime bunker.  It looks like one hell of a last stand. 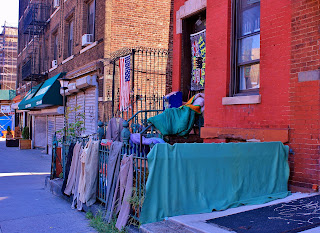 Update: 3/9/16 I'd say this one was a pretty complicated estate sale - and I don't know exactly how it finally played out. I was told, however, that the elderly man living at 461 recently accepted a payment to move out. There are no jobs filed at the building - its future is unclear.

Posted by onemorefoldedsunset at Tuesday, August 27, 2013

So sad to witness the end of days...

Yes, it's very sad, and the way the sharks take advantage is horrific.