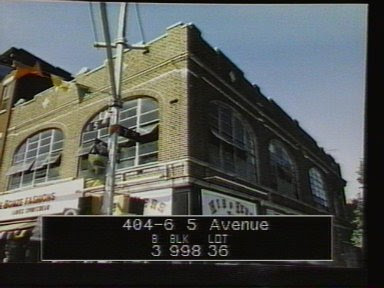 Too bad the text blocks a crucial part of the picture.

Over the course of the week I usually run into Cooky -the former longshoreman who lives nearby on Fifth - at least a couple of times.  This always puts me in a good mood. Usually he's right in the same spot, the Timboo's/Skylark corner, watching the scene or chatting to friends as they pass by. Sometimes I'll see him elsewhere, but always within a three or four block radius.  Cooky turned 80 this year, and has had a lot of health problems of late, but is relentlessly upbeat and a treat to talk to.  And just to listen to: Cooky has an older city accent that you rarely hear round here anymore. More like something you'd hear in a film or radio clip from the '40s or '50s,, or imagine in your head as you read a Joseph Mitchell story.  Oh a grand accent.  The other day we talked bars, and Cooky said he used to get down to Sunny's when he was younger, when it was a busier, working man's kind of a place. Jackie's imminent closure came up too, and he said it was just about the last bar around here where someone short of money could be sure of drinks and something to eat. He said just about all the old bars along Fifth, whatever their reputation, used to look out for the hungry and thirsty, but with Jackie's gone, that would be it.  Timboo's had been that kind of a place, generous with the food, and willing to overlook payment for a few drinks.  He said there were a few selfish types, including one Timboo's regular who'd sooner give leftover pizza to his dogs, or even stub his smokes out in it, than share it, but most people were good-hearted.  Hard times were understood .  Chuckling, he said he'd once watched from his window and counted fifteen freeloaders make their way, one by one, into the bar.  This sounded like an unreasonable burden for even the most generous of businesses & patrons.

Posted by onemorefoldedsunset at Friday, August 23, 2013