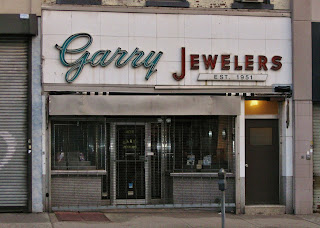 Garry Jewelers, at Fifth & 11th, still boasts one of the loveliest original 50's storefronts around, though the store itself has been shuttered for over four years. Garry closed in 2009, due to family illness. As the character of the avenue has changed since then, I've watched the empty place with growing anxiety. That sign has such an understated elegance about it, and I've passed by it thousands of times to and fro from home. It's quietly familiar. And I've missed going inside - where the store was equally vintage - and hanging around chatting to the Garafolas. How long could it stay empty? It seemed certain that one day I would see the signs dismantled, and something more nouveau-Brooklyn in its place. But maybe not so very certain. I knew the store was owned, not leased, and always saw a light in the window, with a clock that never stopped marking time. And the mail was picked up with regularity. It was a store in hibernation. Today I got word that there are some serious plans for reopening.  Well, you never know with these things, and it may be more dream than reality but it's still pretty exciting news.  Sunny's on Thursday, Garry's on the horizon?  We live hopefully. 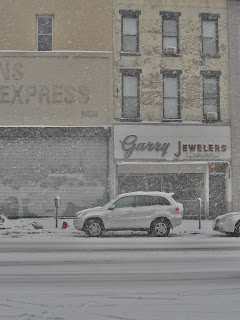 
Posted by onemorefoldedsunset at Saturday, August 31, 2013