At 77th Street & 31st Avenue, I thought immediately of last year's Times story: On City's Stoops, a Familiar Shelter is Losing its Appeal:

"Small metal awnings and their translucent cousins were once a staple over stoops across New York City, on houses made of brick or clad in vinyl, and even on brownstones. They can still be found in one neighborhood after another, sometimes on every home of a block. They provide shelter as you fumble for your keys in the rain, and they keep snow from collecting at the top of the steps.

Yet they appear to have fallen out of fashion. In areas like Greenpoint and Windsor Terrace, where new owners with extra cash to spend on aesthetics are buying old houses, some of which last saw a sprucing up during the Johnson administration, the awnings can be a casualty of gentrification." 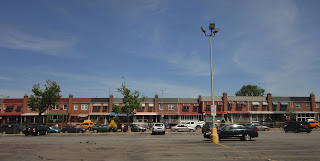 No casualties here on the East Elmhurst/Jackson Heights border.
Posted by onemorefoldedsunset at Monday, June 24, 2013