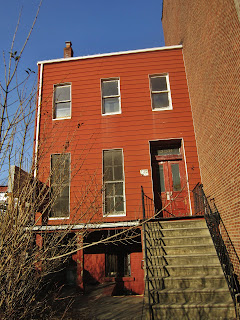 At 359 7th Street, demo will begin soon. A new two-family will go up, possibly looking something like its future neighbor: 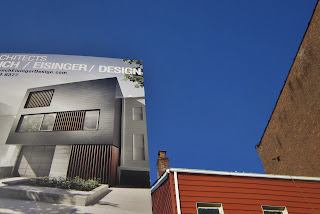 359 was sold as a teardown at $1,250,000, so if built for a quick resale you could imagine the new place being sold for well into the two to three million range. I've always had a soft spot for the old house. Something about those long, narrow, parlor floor windows, its attic under the eaves, and the peeling paint on the double front doors.    I used to imagine sitting on the stoop there, on a summer evening, in aimless, easy contentment.  The sun lit that red house right up at the end of the day. This would have been a fine place to live in, and all the better for its weathered ways.

I grew up in an old house.  Its windows leaked in heavy rain,  and a bucket in the bedroom caught the drip, drip, drip, of water from the roof.  It was heated by coal fires, & in winter you jumped into bed clutching a hot water bottle.  There was no refrigerator; we kept our bottles of milk in a cool, dark cellar.  There was an orchard, a henhouse, a family of half-wild barn cats, and a wide front door with etched glass panes.  A local herd of cows often broke out of their field & came grazing on our garden flowers, much to my mother's consternation.  In front of the house was a wych elm tree (I always thought it was "witch elm"), a tree known for magical associations.  When I was six or so, my mother drew a portrait of me sitting underneath it, surrounded by woodland spirits.  I believed in toadstool circles, was nervous of something wicked that might just lurk at the bottom of the orchard, and wanted to leave home with the gypsies who arrived each summer.  It was a golden childhood.
Posted by onemorefoldedsunset at Monday, March 18, 2013