CB6 meeting: Libraries on the Agenda

At a CB 6 meeting tonight, one of the items on the agenda.

Presentation and discussion with representatives for the Brooklyn Public Library on the range of services and programs throughout the boroughwide library system with specific highlights on local services available at our district's four branch libraries, namely, Carroll Gardens, Pacific, Park Slope and Red Hook.

The fate of the Pacific branch will certainly dominate the discussion, so if you can, go & support the efforts to keep the library at its current site.  This afternoon the BPL Vice President of Government & Community Relations, Josh Nachowitz (previously at the city's Economic Development Corporation), was at Pacific, camera in hand.  Gathering evidence, it seems, of  the building's purported dire shape. 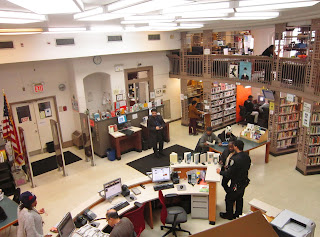 Yes, it has a few run-down spots, and I certainly have no architectural knowledge. but its condition looks far better than the BPL development folks would have us believe.  It also has something a brand new "state of the art" facility at another location may struggle to acquire, and that is spirit of place.  Its scale, its shape, its vantage-points.  The feeling that you're one of a succession of readers, over a century, sharing the same space.   That you're part of a long-standing democratic tradition: the free access to knowledge, for all citizens. I'm a little romantic, but I'd rather read in a library with a history than a glorified office space in a high-rise.

I had a brief conversation with Mr. Nachowitz.  He was very civil, but kept to a familiar script in defense of the library's closure & relocation.  We clearly had different views about libraries.  I saw the children's room here as a snug & inviting retreat, but he saw it as prison-like.  I was saddened that these days revamped libraries had fewer books on the shelves.  He maintained that people didn't browse any more, and were more likely to use inter-library loans.  Libraries didn't need the kinds of individual collections they once had.  An economically useful argument perhaps, but hardly one designed to encourage breadth of reading.   How do you know what you might want to order if you haven't had exposure to a good selection of books in the first place?

I guess the real problem is the leadership, and in a better world, a large public library system would always be led by a qualified librarian.  Maybe a librarian who would protect it, not sell it off.  Maybe a librarian who could reach out & gain the support of a borough of readers to fight together for adequate funds from the city.  I think there are plenty of us who'd step up. 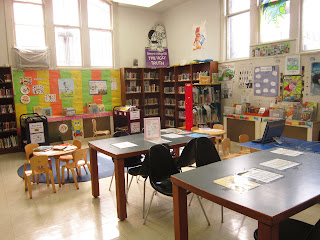 Does this really look so bad?
Posted by onemorefoldedsunset at Wednesday, March 20, 2013