In addition to the planned closure & relocation of the Business Library (see yesterday's post), the BPL has announced a similar fate for the Pacific branch (Daily News)


The two libraries on the block, the Brooklyn Heights and Pacific branch in Boerum Hill, are in need of crippling repair costs the system can’t afford, a BPL official said.
The Brooklyn Heights branch on Cadman Plaza West would be sold to a developer as early as next year, keeping a smaller version of the library on the ground floor and building apartments over the existing complex.
Plans also call for the building that houses the Pacific branch on Fourth Ave. to be sold, with the library moving to a planned building in the newly-created Brooklyn Cultural District.


I can't say I've spent much time in the Business Library, but I love the old Pacific branch.  Opened in 1904, this was the first Carnegie library in Brooklyn.  Architecturally, it's a gem, with its semi-circular design, balconies, and original entrance hall.  In contrast to the bland updated Park Slope branch at 9th Street, teeming with strollers & screens, but light on books themselves, it's a place that radiates warmth, perfect for settling down to read a book others have held and enjoyed before you.  To feel the hushed history of printed pages.
This branch was saved from demolition in the 70s.  What's next? 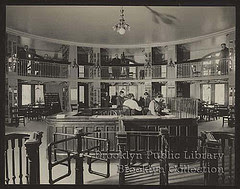 Posted by onemorefoldedsunset at Wednesday, January 30, 2013