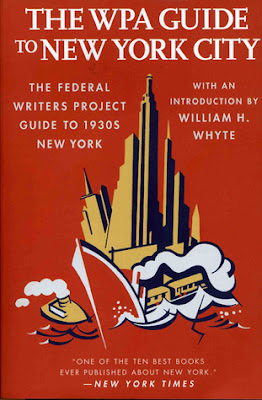 Here's an extract on Sunset Park:


"The Sunset Park Neighborhood, south of Fifth Avenue and Thirty-sixth Street, is inhabited by a large number of Scandinavians and Finns. Local enterprises including small businesses of every type are bound together in the nationally known Finnish Co-operative Association. The apartment house at 816 Forty-third Street, opened in 1916, is supposedly the first co-operative dwelling established in New York City. Within the locality are several Finnish steam baths; the restaurants feature Finnish dishes: keittokirja (cabbage soup), liha pullia (meat balls), silli perunat (herring and potatoes); the homeland's culture is kept alive by Finnish societies; and folk dances are held occasionally at which the women wear the gay peasant costumes of their native land. The bluff of Sunset Park, Fifth Avenue and Forty-second Street, affords a thrilling view of the harbor."
I'm well aware of the Finnish co-ops, but have never eaten any Finnish food in the neighborhood, nor do I know whether any steam-baths still exist.  On the Army Terminal website Neighborhood Overview, written some seventy years later, there's a briefer, less colorful mention of food & baths.
Visitors can still enjoy Finnish steam baths and a number of restaurants that serve traditional Finnish dishes ...
But where? Scandinavian culture seems to have hung on for longer in this part of Brooklyn, especially in Bay Ridge, which still holds an annual Norwegian Parade, but traditions are fading here too.  Even the Bay Ridge Leif Erickson bar closed not long ago.  I've heard of several businesses in the southern (Little Norway) section of Sunset Park, so will try and see if any are still there.  Maybe this research necessitates return visits to the Soccer Tavern, where, I've been told, you may still run into an elderly Norseman or two. To track down Finnish businesses seems harder.  The Sunset Park-based Finnish New York Uutised newspaper ceased publication in 1996, and the Imatra Social Club on 40th Street closed in the 60s. I think I'll be off to the Finnish Cultural Center in Manhattan to look for help.
In the meantime, putting Finnish mysteries aside, here's are two small Scandinavian buildings on 56th Street, between Second & Third.  Who wouldn't want to live in Viking House? 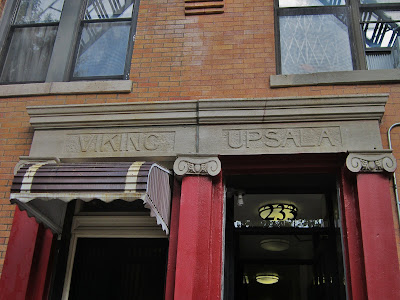 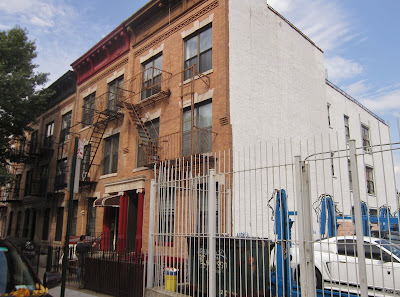 Posted by onemorefoldedsunset at Monday, October 08, 2012