"I don't want shows you come out of like you had Sunday lunch, I want you to be repulsed or exhilarated," the man said. "If you leave without emotion, I'm not doing my job properly."
(Alexander McQueen)


I rather like the uniform approach to dressing.  For most of the summer I've been wearing a sleeveless black shirt, knee-length dark grey shorts, & flat black sandals.  There's nothing particularly special about this, but it does the job, and it makes life simple.  If there's something that works, simply repeat.

High street fashions bore me, & are too much money.  I go second-hand.  In my dream life I'd splash a lot of cash on a McQueen - so dark, raw, primal & transformative.  It being a dream of course, I'd pull one off.  They're not fashion - fashion's a bore.  They're a second skin.

In a time of terror it was a good retreat to go & watch the documentary in the afternoon.  It was busier than the average matinée, & I had to move to another seat because of the heads in front of me.  I was two seats away from a couple of badly-dressed matrons and after the film was done they stayed, chatting.  The credits rolled, every other row was emptied out & the cleaning man came in to get the trash.  I wasn't in a hurry, but I was standing up looking at them, waiting to see if they'd notice me. I waited & waited but they didn't budge.  In the end I had to ask to get by, which pissed me off, especially as they didn't shift an inch when I squeezed past.  I wish I'd kicked them in the shins.

For every pair of snotty East-siders there's another pair that fills your heart with joy.  Later that day I came across a couple of seventy-somethings sorting out their shopping bags in front of Housing Works.  They were all matched up in red & black.  He had a rustic looking tree-limb of a walking stick & she wore shades with scarlet frames.  Her hat was magnificent.  I had to cross the street to compliment them on their style & so did a tall guy who declared them seriously wavy.  "We always thrift shop,"the woman said, beaming.  "You don't have to spend to look good." She was right. 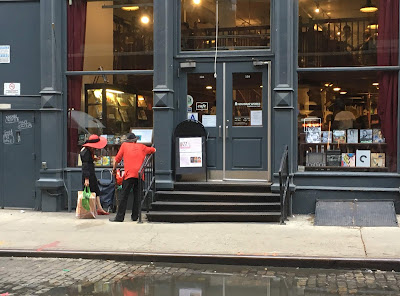 It's not in the money.  You have it or you don't. The dresses Lee McQueen made for a tenner on the dole had the same energetic brilliance as the ones he made as a French couturier.  All of them dazzled & seethed.

Lately I've come to think that everything you are or you become is pre-determined in the light & dark shades of your first few years.  The rest's just how you learn to live with them
Posted by onemorefoldedsunset at Wednesday, July 25, 2018