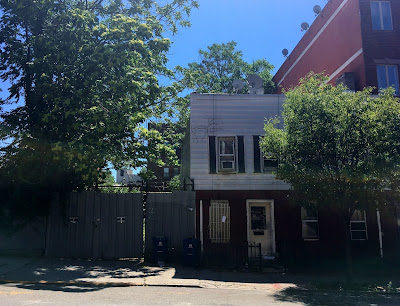 An application has been filed for demolition at 276 & 278 20th Street.  The properties were sold in April for $3.3M.  276 (above right) is pre-1880, and originally there was a house of similar age next door.  In 1878 John Burke's liquor store operated there. The house numbers are a little confusing, and maybe fluid, as there's also a record of a wagon shed built at 278 in 1909, when the owner was M.A.Farrell.  Edward J. Farrell and his family lived at 278 between the late 1870s and early 1900s.  Edward worked for forty years at the Great Atlantic and Pacific Tea Company, later known as the grocery chain A&P.  The Farrells and their tenants (German, Polish, Italian) appear a number of times in the Eagle, in the usual records of marriage, birth & death. The usual mix of duty, petty larceny & mishap is here too. Farrell men went to war. John Farrell, Edward's son, was accused of robbing a man of seven dollars and a silver watch.  John Hoffmeyer, who worked as a driver at Mason's furniture store (Fifth & 17th) broke his arm after a fall in a manure pit.

Houses like these continued to welcome new arrivals to New York for another century or so, as Puerto Rican and Mexican families found homes in the neighborhood.  This is the real America, caught in the dip of stairway steps worn down by generations, and in floors layered in wood & linoleum and tile.  Its DNA is all bound up with those who inhabited it, more precious than any flag or anthem.  You want the beautiful?  This is it.
Posted by onemorefoldedsunset at Friday, July 06, 2018