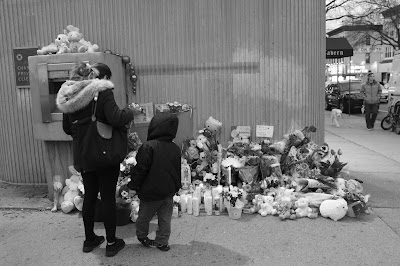 I've lived below 9th Street for over thirty years.  In fact, I've always thought of 9th Street as right where my neighborhood begins.  Whenever I return from parts north, I always get that feeling of home when I cross its boundaries.  And it's a fine border, a hub of activity from people coming to or from the train, or bus, or on foot, from every direction.  There's nothing pretty about Fifth and 9th except the people.  By some quirk of fate, or its very unremarkable features, Fifth & 9th has stayed immune from any fancy makeover. It's anchored by basics: the bank, the grocery, the discount store.  A convenience store & good Halal stand.  Along with the new there are old familiar faces: Connie, our resident diva panhandling in Chase, the sock vendor, the guys selling empanadas down the block, the bleary-eyed drinker outside Smith's, the occasional fiery street preacher.  Schoolkids, stroller moms, shoppers, and hangers-around. There's a diversity here long gone in most of what you'd call Park Slope today. You're still as likely to hear Spanish here as English.  Fifth and 9th is for everyone, on everyone's route. It's the best of us.

But it's not a safe crossroads. Just in the last year or two, we've had cars careening onto the sidewalk and crashing into corner stores. A pedestrian was mown down by a speeding car. Yesterday two more lives were lost - two little children, crossing the street with their mothers.  Their deaths broke everybody's hearts, and all day I've seen crowds gathered around the makeshift memorial outside of Chase.  The mix of the groups that gather here is the only thing that can possibly console on a day like today.  All of us together: black, white, brown, young, old. In these fractious times, we're easily divided, and quick to lay the blame or stereotype each other - the NIMBY curmudgeon, the self-absorbed millennial, the showy newcomer, the elderly has-been.  But here by the memorial, everyone feels united.  Everyone feels the same shock at the senseless deaths of such young kids.  It could have been any of us.  Any of our children, or our children's children. And everyone I hear or speak to is angry that the drivers who speed through our streets are still, after all this time, getting away with murder.  Everyone wants real justice, now.

Throughout the day the memorial grows bigger, as people stop to light candles, drop off flowers or toys, or simply draw together for comfort.  Mothers and children stand, wordless.  Decades of deaths and injuries, and near-misses - both here at 9th & on nearby blocks - are recalled.  A couple of people remember there used to be a toy store where the bank now stands.  It seems fitting in the saddest way. With a storm coming in, someone remarks that the rain and snow will wash away the cards and roses and little plush bears by morning.

How many more memorials must it take?
Posted by onemorefoldedsunset at Wednesday, March 07, 2018